Cristiano Ronaldo scored from the openalty spot as Manchester United won their third trophy of the season - the Carling Cup! With United winning the Community Shield and the World Club Championships (to become champions of the world), United have now added more silverware to their trophy-cabinet.

Goalkeeper Ben Foster, given a Wembley opportunity as manager Sir Alex Ferguson rested Edwin van der Sar, was United's hero with a stunning save from Aaron Lennon in normal time. Foster distinguished himself with a superb save from Jamie O'Hara's spot-kick, and when substitute David Bentley missed, Spurs' fate was sealed as Anderson confirmed United's victory.

Ryan Giggs, Carlos Tevez, Ronaldo and Anderson were successful for United from the spot in the shoot-out, but only Vedran Corluka scored for Spurs.

Ferguson kept to his promise to maintain faith with youngsters Darron Gibson, Danny Welbeck and Jonny Evans - but his hopes of calling on Wayne Rooney were dashed after the England striker was ruled out by a virus.

Spurs counterpart Redknapp was spared a selection dilemma when Jonathan Woodgate was ruled out by an Achilles tendon injury, allowing Michael Dawson to partner Ledley King in defence.

Gibson almost made a stunning early impact with a rising 25-yard drive that sailed just over the angle of post and bar with Heurelho Gomes beaten. Keeper Gomes was called into action again after 15 minutes when he dived low at the near post to turn away Nani's effort as United dominated the opening skirmishes.

As the early life went out of the final, Spurs were able to establish a foothold and create a series of promising openings down the flanks, only to fail to find the decisive final ball.

Spurs had successfully kept Ronaldo at arm's length, while youngster Welbeck was having a tough time making an impact in the face of the physical presence of Dawson and King. Indeed, it only took Ferguson only 10 minutes after the break to decide to remove Welbeck and introduce Anderson into midfield.

Ronaldo's frustration was plain to see when he was booked for diving by referee Chris Foy in the 66th minute as he tumbled in a collision with Spurs captain King just inside the area - a decision that was a desperately close call.

Foster justified his inclusion with a stunning save from Lennon after 70 minutes after Benoit Assou-Ekotto's cross found him in space 12 yards out.

Ronaldo almost won the cup for United in the dying seconds of stoppage time when he cut inside and lashed in a shot that bounced off the upright with Nani unable to turn in the rebound.

It meant extra time - and the inevitable introduction of Ryan Giggs for the tiring Gibson. As fatigue sent in among both sets of players, it was going to take a mistake or a moment of inspiration to decide the destiny of the cup in the closing stages. Modric almost provided it after 115 minutes with a run into the box that ended with Foster saving well with his legs from Darren Bent.

And Evra almost did likewise at the other end with a shot that was just over the top as Gomes could only look on. It was the last meaningful action as a final that was high on endeavour but low on moments of genuine quality went to penalties.

Giggs gave United the perfect start in the shoot-out, and Foster set up the win with a fine save from O'Hara's spot-kick. Tevez and Corluka exchanged successful penalties, but Bentley sent his wide after Ronaldo had slotted his away. Anderson stepped forward to complete the formalities and United had achieved the second part of their pursuit of the five major trophies on offer to them this season. 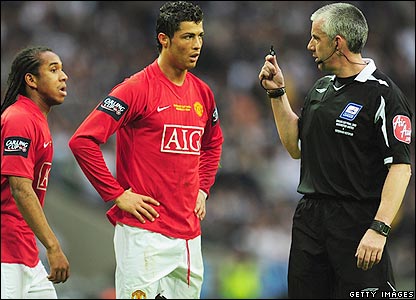 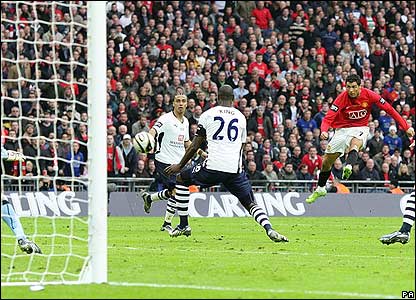 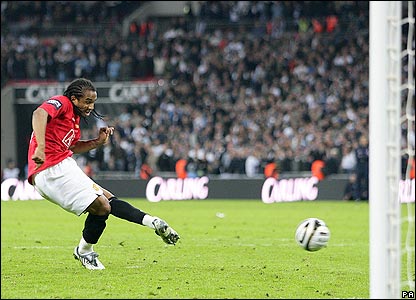 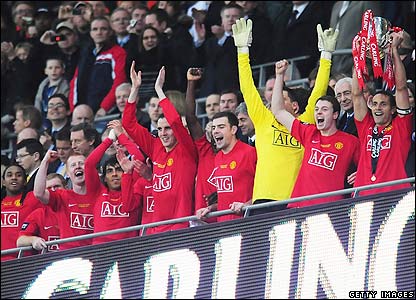