Cristiano Ronaldo was left at home, so could do nothing as Everton won a penalty shoot-out to ruin Manchester United's hopes of a quintuple.

Ferguson made wholesale changes to the side that secured a Champions League semi-final place with victory in Porto on Wednesday - with Wayne Rooney, Cristiano Ronaldo and Edwin van der Sar not even on the bench. But United's revamped line-up acquitted itself well in a drab first 45 minutes that offered little in the way of quality or chances.

Marouane Fellaini sent Neville clear in a dangerous position inside the area after 10 minutes, but finishing has never been the Everton captain's strong point and he blazed well off target.

Carlos Tevez then shot wide for United before goalkeeper Ben Foster nearly gifted Everton an opener in the 20th minute, stumbling over an attempted clearance and almost allowing former United striker Louis Saha in to score. Everton had a narrow escape two minutes later when Rafael's cross was touched on by Welbeck, before a deflection off defender Joleon Lescott diverted the ball on to an upright with Howard wrong-footed.

Darron Gibson tested Howard from long-range as the game finally showed signs of life. United were then denied what looked the clearest of penalties when a breakdown in communications between Howard and Jagielka forced the defender to haul down Welbeck. Riley, whose appointment had been been questioned by Moyes, waved away United's appeals as Ferguson was moved into a jig of fury in his technical area.

Welbeck had recovered from a nightmare first half, showing great character to emerge as a threat for United, curling a good effort just off target with seven minutes left.

United, who had already introduced Paul Scholes, brought on Berbatov for Federico Macheda at the end of 90 minutes, perhaps hoping a moment of quality from the Bulgarian would avoid the need for penalties.

But there was to be no breakthrough and the teams went into a penalty shoot-out, which would at least provide some drama on an afternoon that was hardly a glittering advert for the Premier League.

United keeper Foster was the hero in the Carling Cup win against Spurs, but there was to be no repeat as the Toffees kept their nerve to run out winners and book a return to Wembley to meet Chelsea on 30 May. 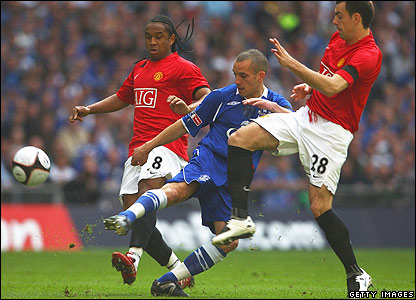 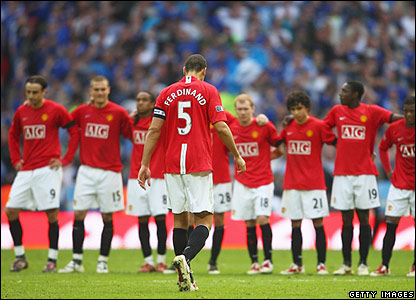