Kris Commons' fierce strike gave Derby County a shock win in the first leg of their Carling Cup semi-final against a lethargic Manchester United side. It was a humbling night for the Premier League, European and club world champions, who were deservedly beaten by a Derby side that has won only one of their last nine league games.

The attention before the game was on Clough, whose legendary late father Brian took the club from the old Division Two to the 1972 League title, and Clough Jr received a rousing reception from home fans at a sold-out Pride Park before kick-off.

Davies was denied by Tomasz Kuszczak when he let fly from a tight angle and, after the ball fell kindly for the former Tranmere midfielder, Nemanja Vidic did well to block his goal-bound follow-up.

Mile Sterjovski was the next Derby player to have a shot cleared off the line, when Jonny Evans hacked away his first-time effort, and Andy Todd was unlucky to see his lob land on the roof of the net soon afterwards when a poor Kuszczak punch fell at his feet.

Even those near-misses were not enough to awaken United from their slumbers and Commons' goal on the half-hour mark was fully deserved. The United defence backed away from the Scotland international and he had time to pick his spot before blasting a ferocious left-foot shot past the despairing Kuszczak from 25 yards out.

Sir Alex Ferguson's men had brushed aside another struggling Championship side when they beat Southampton in the FA Cup on Sunday, but they seemed strangely out of sorts here. Apart from easily catching a Nani free-kick which was intended as a cross, former United keeper Roy Carroll did not have a save to make in the opening 45 minutes.

True, visiting manager Sir Alex Ferguson probably had at least one eye on Sunday's crunch Premier League encounter with title rivals Chelsea - and his starting line-up undoubtedly reflected that. But he will still have been unhappy with his side's efforts and the only surprise was that he did not bring Wayne Rooney or Ronaldo off the bench until the 63rd minute.

Carlos Tevez, who returned to United's starting line-up after a new year trip to his native Argentina, was particularly ineffective and, for the most part, Derby looked comfortable with their lead. United did improve before the end, with Ronaldo dragging one shot wide before firing in a free-kick that fizzed just the wrong side of Carroll's post.

United will still be favourites to overturn their single-goal deficit in the second leg at Old Trafford on 20 January. 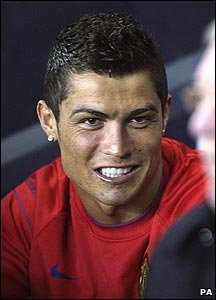 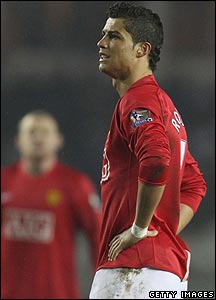