Cristiano Ronaldo sparkled at times in a satisfactory draw away at Inter Milan. The result menas United have to win at Old Trafford to knock out Jose Mourinho's Inter team, and make ii through to the Quarters.

Manchester United dominated for much of this lively Champions League last-16 clash but had to settle for a goalless draw with Inter Milan at the San Siro. With Nemanja Vidic suspended, and Gary Neville and Wes Brown injured, Ferguson's hopes of improving on a measly record of one win in 12 games against Mourinho rose slightly with Jonny Evans and John O'Shea declared fit an hour before kick-off.

With Giggs and Michael Carrick dominant in the middle in the opening exchanges it was the visitors who settled the quickest, with Ronaldo in the thick of the action. The Portuguese winger had already gone close with a free-kick, and after four minutes his rocket header from a Giggs corner was brilliantly saved by the left arm of Julio Cesar.

While Inter's attackers were struggling to make friends with the ball, their defenders were faring little better and were lucky to get away with a Giggs through-ball to Berbatov, who failed to cross to the unmarked Ji-Sung Park.

A shockingly-timed Nelson Rivas tackle then allowed Giggs to squirm his way though again but the Welshman could only blast the ball at the over-worked keeper.

The home support became increasingly agitated as the sea of red piled forward, with Ronaldo just inches away from opening the scoring with yet another free-kick. He then headed just wide.

The Italians were much better and more composed in the second half with the menacing Cambiasso pushing the United defence regularly onto the back-foot. Mario Balotelli and Julio Cruz were thrown on for Inter, but the Old Trafford side were not content to sit back with Ronaldo pulling back for Park, whose sliding legs just avoided the ball.

Giggs, once again on imperious form, went on a dazzling run, only to be thwarted by a lunging blocked tackle by Cordoba on the penalty spot and then Rooney, on as substitute with five minutes left, was denied by the legs of Cesar.

After Cordoba had brought Ronaldo down on the edge of the box in injury time and the Portugal star strolled up to take the free-kick, you sensed the headlines may be his. But the ball flew safely within range of the impressive Cesar and so Old Trafford awaits for battle to recommence in a fortnight. 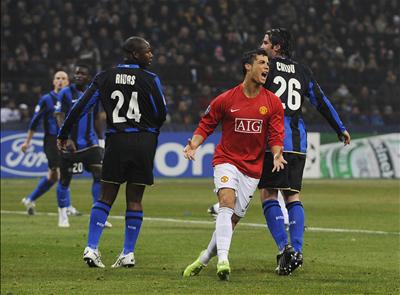 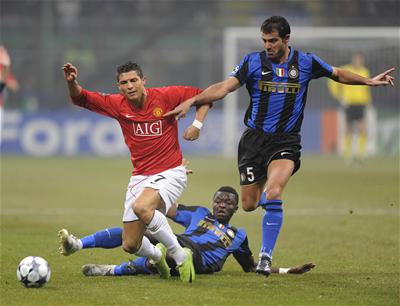 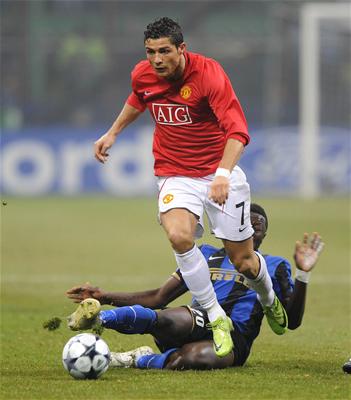