Cristiano Ronaldo scored to put United ahead, but could only watch on in horror as Liverpool managed to score 4 past a United side that looked surprisingly fragile in defence. The result blows the title-race wide open.

United remain firm favourites to claim the Premier League, with a four-point advantage and a game in hand, but if Liverpool needed any incentive to continue to carry the fight to United, the impressive manner of this performance will have provided it.

Liverpool, once they found their feet, were the brighter and more creative side - with the magnificent Torres the spearhead, ably assisted by Gerrard. The Premier League leaders, in contrast, were lifeless in all areas as they suffered their heaviest home defeat since losing 4-1 against QPR on New Year' Day 1992.

Torres posted the warning signals for United with a turn inside the area that needed Vidic to clear.

But it was United who took the lead after 23 minutes when Liverpool were punished for a rush of blood from keeper Reina, who dashed from his line and brought down Park when there appeared to be no imminent danger, Ronaldo completing the formalities from the spot.

If United thought the setback would break Liverpool's resolve, they were to be sadly mistaken as Torres produced a golden spell that had them in front before the interval. He levelled after 28 minutes with an example of all the qualities that make him arguably the world's finest striker. Martin Skrtel's long clearance was speculative at best, but Torres' presence created uncertainty. Vidic let the ball bounce and Torres showed lightning speed to touch the ball away from the defender and steer a composed finish beyond Van der Sar.

There had been few flashpoints, but there was a swift exchange of bookings after Liverpool's Carragher tripped Carlos Tevez and Rio Ferdinand fouled Dirk Kuyt.

Liverpool had ended the half in the ascendancy, and they were rewarded with the lead in the 44th minute. Torres was the creator with a clever pass inside Evra, and when Gerrard was tripped after reaching the ball first, referee Alan Wiley again got the big decision right and pointed to the spot. Gerrard tucked the penalty beyond Van der Sar, leaving Old Trafford stunned at the strength of Liverpool's fightback.

United, inevitably, penned Liverpool back after the break. Liverpool were fortunate to escape after 62 minutes when Ronaldo, a subdued figure throughout, found Rooney at the far post and his header flew across the face of goal with Tevez unable to apply the finishing touch.

Ferguson went for broke with 18 minutes left, making a triple substitution as he sent on Dimitar Berbatov, Ryan Giggs and Paul Scholes for Anderson, Carrick and Park. But there was barely time for his changes to make a difference as United were reduced to 10 men and went further behind in the space of seconds.

Vidic, who was also sent off at Anfield earlier this season, had suffered a harrowing afternoon, and once again his control was poor as he allowed Gerrard a clear run on goal. He chose to haul Gerrard back and the red card that followed was inevitable. As a stunned Old Trafford came to terms with that, Aurelio poured salt in the wounds with a superb 25-yard free-kick that left Van der Sar rooted to the spot.

The stadium was deserting rapidly as Liverpool inflicted one final piece of punishment on United, substitute Dossena lifting the ball over Van der Sar. 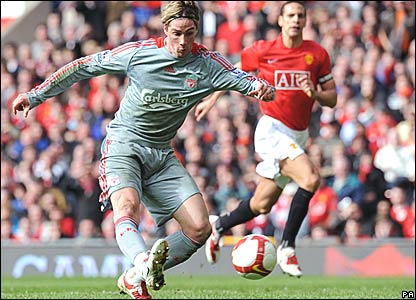 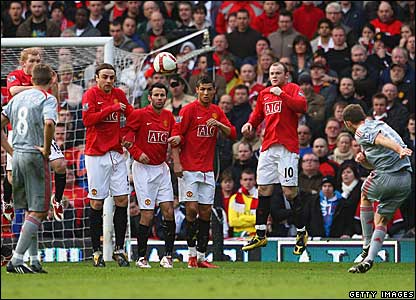