Cristiano Ronaldo had a frustrating night - being chopped and kicked from behind all night with minimal protection - but United managed to win at the death, with a stunning goal by Michael Carrick. Ronny is just one point off a third consecutive Premier League title.

Ferguson restored Wayne Rooney in attack with Tevez - whose Old Trafford future is the subject of fevered debate - dropping down to the bench.

Latics boss Bruce insisted his side would make every endeavour to stall United's title bandwagon and they made their intentions clear as early as the second minute when Valencia burst clear of Vidic but shot wide.

United soon posed a threat of their own when Dimitar Berbatov slipped away from Titus Bramble but Rooney directed his header wildly off target from point-blank range. Carrick then stole in on Cristiano Ronaldo's cross, only to lift a close-range effort over the top.

United were holding sway in possession but Wigan's attackers were energetic and they were rewarded when Rodallega put them ahead after 28 minutes, outmuscling Vidic before recovering his composure to shoot low past Edwin van der Sar at the near post.

Wigan delivered another warning to the title favourites in first-half stoppage time when Rodellega shot wide after some slick approach play from Valencia and Lee Cattermole.

United struggled to make an impact after the break and it was no surprise when Ferguson made a change after 57 minutes, sending on Tevez for Anderson. And within four minutes the Argentine had put United level with a finish of instinctive brilliance, although there was also a sprinkling of good fortune in the creation of the goal. Carrick's shot was flying off target but Tevez turned it to his advantage with a stunning flick that completely wrong-footed Kingson.

United then had penalty appeals rejected when Ronaldo tumbled under a challenge from Maynor Figueroa but referee Rob Styles waved away their appeals.

Wigan, predictably, were placed under constant pressure in the closing stages and finally cracked with four minutes remaining. John O'Shea set up Carrick on the edge of the area and he flashed a rising left-foot drive high past Kingson.

United now only need a draw from the home game against Arsenal on Saturday or the trip to Hull City on the last day of the season to complete the formalities of another title triumph. 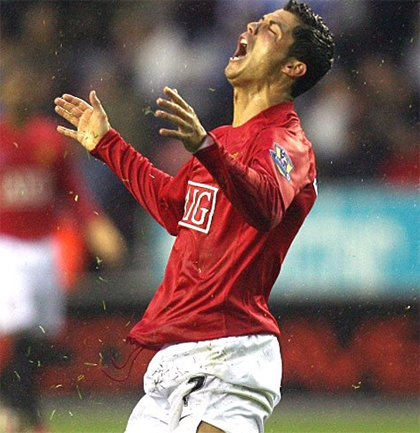 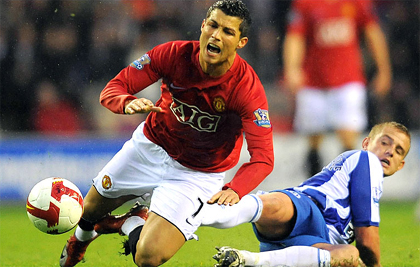 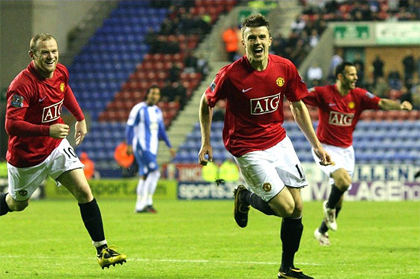