In the Quarter Finals

Cristiano Ronaldo scored one and set up another as Manchester United crised to the next round of the FA Cup. Ronaldo was played as the main striker, and should have had two - his first was wrongly ruled out as offside.

United dominated from the kick-off and Gibson, one of seven changes to the side that beat West Ham last time out, demonstrated their intent in the opening minute with a powerful forward run, but his rising drive cleared the bar.

Fletcher was the first to test out Stephen Bywater with a stinging drive from the edge of the box after a neat interchange of passes with Ronaldo and Ryan Giggs. Nani then turned Rams skipper Paul Connolly inside out down United's left before delivering a deft chip to the back post, but Park's header was palmed away by Bywater.

Derby had half chances of their own, but Rob Hulse fired a volley on the turn just over and directed a header wide before Kris Commons forced United keeper Ben Foster into a low save from a 30-yard free-kick.

But the goal that United's domination deserved duly arrived just before the half hour mark. The ball was worked across the edge of the box to Nani, via Fletcher and Giggs, and the Portuguese winger cut back in from the left and hit a powerful drive beyond Bywater with his right foot.

Ronaldo thought he had doubled the lead when Foster's quick throw-out was flicked into his path by Giggs and the Portuguese forward raced clear and tucked the ball home. But as Ronaldo wheeled away in celebration, the assistant referee learned from referee Alan Wiley that Giggs had touched the ball in the build-up and he belatedly raised his flag for offside.

United's second goal, just before half-time, also had a touch of controversy about it. Gibson lashed in a low volley from 20 yards after Ronaldo's free-kick had hit the wall, but United's Rafael Da Silva, technically in an offside position, had to hurdle the ball before it flashed past Bywater.

Ronaldo scored a legitimate goal immediately after the restart though, powerfully heading Giggs' corner over Gary Teale and into the net.

Derby refused to be beaten though and pulled one back when Robbie Savage's quick free-kick found Commons on the right and his centre was headed home by Addison just before the hour mark.

United had the last say though when Fletcher and Giggs combined again on the edge of the box before the former flicked a pass out to substitute Danny Wellbeck on the left and the 18-year-old curled a first-time shot beyond Bywater. 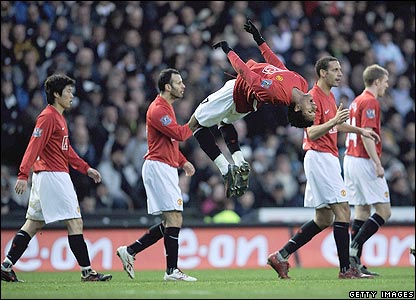 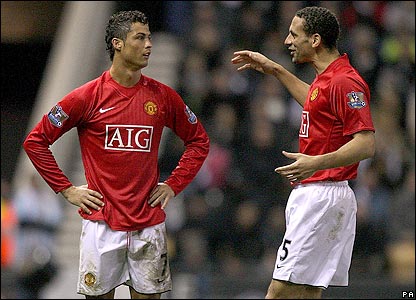 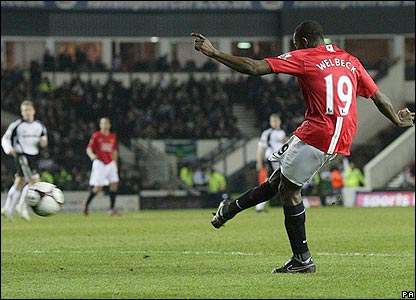