Manchester United kept up the pressure on Liverpool and Chelsea as Dimitar Berbatov's third league goal for the club saw off a spirited Middlesbrough. United move seven points behind leaders Liverpool with two games in hand.

United, meanwhile, look to be gelling and have dismissed any notion of a hangover from their exploits in the Club World Cup on the other side of the world just before Christmas. Despite having to wait to break the deadlock, they pushed forward constantly and maintained an exciting tempo throughout the match.

United set about creating a series of early openings but could fashion nothing clear-cut. Rooney, full of wit and invention, had a decent shot pushed aside by Boro keeper Ross Turnbull but European Player of the Year Cristiano Ronaldo badly miscued after being set up by Ji-Sung Park.

Instinctive link-up play between Berbatov and Rooney after 22 minutes saw the latter cut the ball back across the penalty area for Ronaldo to screw a left-foot shot just wide of the post when he should have scored.

As the action intensified, Turnbull had to push Rooney's clever floated cross-shot away from his goal before young Brazilian right-back Rafael crashed the rebound into the side-netting.

United were partly guilty of trying to walk the ball into the net but Boro were impressive when they had possession and defended in numbers brilliantly when other teams could have crumbled.

Ronaldo's increasing frustration with Middlesbrough's aggression and, perhaps, his own stuttering form, became increasingly obvious when he clashed with Emanuel Pogatetz before and after half-time.

No personnel changes were made at the break after which United defender Vidic soon had to be at full stretch to deflect a decent Alves effort behind for a corner after the visitors had broken well.

But when Paul Scholes replaced Darren Fletcher in United's midfield, the flow of play swung back into United's favour almost immediately. And they duly broke the deadlock in the 68th minute when, from a swift, swarming attack, Carrick whipped in a cross that David Wheater could only deflect into the path of Berbatov, who volleyed home from eight yards.

From that point on it was one-way traffic as a flurry of decent attempts from the lung-busting Park and determined Ronaldo threatened to seal the three points for United, now relaxed and rampant.

The reigning champions managed to hold out when Boro rallied late on and they now turn their attention to the domestic cup competitions with a trip to Southampton in the FA Cup on Sunday followed by the first leg of their Carling Cup semi-final with Derby on 7 January. 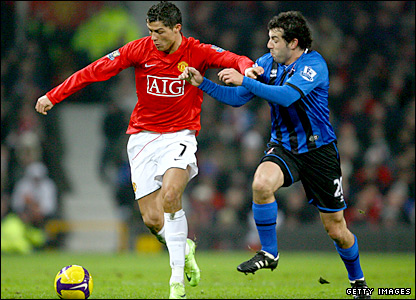 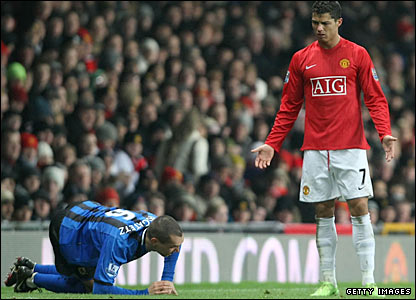