Ronaldo Off for Dubious Handball

Cristiano Ronaldo was sent of controversially on the eve of becoming the European Player of the Year, with Howard Webb booking him harshly twice - including one where there was no advantage gained (or sought) from a deliberate handball by our Portuguese Hero.

Ronaldo had already been booked for bringing down Shaun Wright-Phillips and, when he almost caught Rooney's corner at the near post less than 10 minutes later, referee Howard Webb had no choice but to dismiss him. It was a bizarre incident but did not take the shine off an impressive display by the visitors.

While City began nervously, United were into their stride from the start and could have been out of sight by the end of a one-sided first half. Dimitar Berbatov, operating behind the marauding Rooney, tormented the City defence in the early stages, while Evra and Rafael da Silva were constant threats on either flank. But, for all their possession, a goal continued to elude United.

Ronaldo nodded over from a corner, Hart brilliantly pushed a Berbatov header round the post and Evra blazed over when his own cross was cleared back to him in the box.

It took City over half an hour to create any sort of opening but, when it came, they should really have taken the lead. A whipped Javier Garrido free-kick was only cleared as far as Ireland, who fired the ball goalwards with United keeper Edwin van der Sar out of position. Ireland's shot bounced towards Micah Richards, who was stood in front of the net, but instead of turning it home the defender left the ball and it hit the outside of the post.

That sparked City's best spell of the first-half, with Robinho inches away from collecting Didi Hamann's slide-rule pass in front of goal, but United remained dangerous and it was no surprise when they scored after 42 minutes. The home side had plenty of opportunities to clear the ball but instead it fell for Carrick to fire in a low shot that Hart could only parry into the path of Rooney, who converted with glee for his 100th club goal.

Understandably, City boss Mark Hughes made changes at the break and, after moving Vincent Kompany into midfield, his side were instantly more competitive. City were seeing more of the ball too but they still had to be alert to United's threat on the counter-attack and Ji-Sung Park was twice denied by last-ditch tackles by Wright-Phillips and Dunne.

Ferguson's side continued to get plenty of men behind the ball and even Ronaldo's dismissal did not help the home side, who looked to have run out of ideas before Dunne's late chance came and went.

The scoreline would have reflected the game far better had Rooney scored with his audacious injury-time lob and, in truth, the match perfectly illustrated the gulf in class between the two sides that City's wealthy new owners Abu Dhabi United are hoping to narrow. 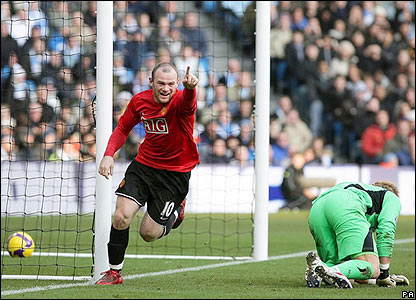