Cristiano Ronaldo wasn't at the very top of his game, but still managed to come away with two fantastic goals! Ronaldo's shiny boots never really reached warp-speed, but he was in the right places at the right time, adn could have come away with a hatrick!

United almost took a second-minute lead after Berbatov's side-footed shot was deflected just over the bar by Matthew Upson. And Nani was cleverly found down the left two minutes later and flashed a powerful snap-shot just wide of Hammers keeper Robert Green's upright.

The home side did have a momentary lapse of concentration but, with Craig Bellamy isolated upfront and West Ham's five-man midfield proving ineffective, United began to run riot. The ubiquitous Nani passed a simple cross behind the visitors static back-line for Ronaldo to guide a low left-footed shot into the corner.

United created chance after chance as Nani fired just wide and Anderson failed to register his first goal for the club when presented with an easy opportunity. Upson fought manfully to stem the tide but United's class was simply overwhelming them.

And the inevitable second goal came on 29 minutes when Anderson caressed the down the left and, after flummoxing Collins with a breathtaking moment of skill on the by-line, Berbatov squared for Ronaldo to slot in his second.

United continued to keep West Ham on the back foot until the break, and Zola's half-time team talk and changes did at least see his side fight under in the second half.

Hayden Mullins made a crucial block on the ever-willing Carlos Tevez in the penalty area, and a posse of Hammers defenders had to combine to block his progress minutes later.

Substitute Wayne Rooney came on for Nani with 20 minutes remaining and soon had Green pushing a deft chip over his bar and scrambling to block a vicious drive.

The Hammers did make a couple of late counter-attacks amid a flurry of substitutions but, time and again, their final ball was not good enough. 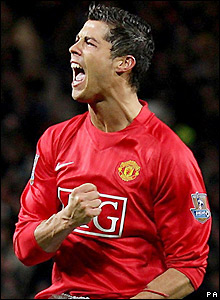 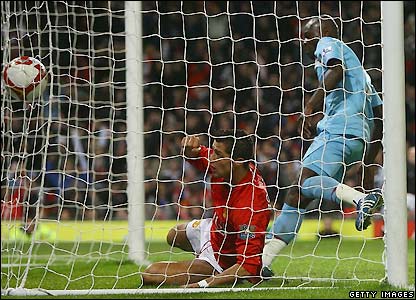