Cristiano Ronaldo was in the thick of it - scoring two great goals that were both wrongly disallowed, and setting up two goals with some fantastic play! United crushed a life-less Chelsea team with Edwin vander Sar rarely touching the ball, let alone saving it!

United were not at their free-flowing best in a game that was too stop-start to be of the highest quality, but they showed none of the fear Benitez might have been hoping to detect. And if this weekend was the start of psychological warfare between Benitez and Ferguson, there is no doubting that it is United's boss who has taken the first round.

They were vastly superior to a Chelsea side that lacked a cutting edge, despite coach Luiz Felipe Scolari pairing Nicolas Anelka and Didier Drogba together up front after the break.

Former Chelsea boss Jose Mourinho watched from the stands in readiness for Inter Milan's Champions League clash with United. He will have been dismayed at how Chelsea failed to trouble Edwin van der Sar and ended up losing so lifelessly.

Referee Howard Webb was in the spotlight after Benitez's blast about Ferguson and officials - and he showed his intent to clamp down quickly with a third minute booking for Frank Lampard after he fouled Ronaldo. It set the tone for a scrappy first 45 minutes that only truly burst into life in the closing stages as United finally exerted a measure of supremacy.

Giggs tested Petr Cech with a powerful free-kick that Chelsea's goalkeeper pushed to safety, before referee Webb produced another flurry of yellow cards. He booked Chelsea's Jose Bosingwa for a foul on Rooney, quickly followed by Portugal team-mates Ronaldo and Ricardo Carvalho for a penalty area clash.

Berbatov has yet to win the hearts and minds of Manchester United supporters, and they were frustrated when he wasted their best chance after 30 minutes, shooting tamely at Cech after he had been played in by Rooney. John Terry - taunted mercilessly by United's fans as a result of his miss in the penalty shoot-out in the Champions League final - then rescued Chelsea with a brilliant tackle on Ji-Sung Park as he looked poised to slide home Ronaldo's pass.

There was a flurry of action and controversy in the closing seconds of the half that led to United taking the lead. Ronaldo's header was ruled out from Giggs' cross after Rooney had taken a short corner that went virtually unnoticed by anyone inside the stadium. United were furious, but their pain was eased when the re-taken corner from Giggs was flicked on by Berbatov for Vidic to head in at the far post. The diving Cech got a hand on his effort but failed to keep it out.

Chelsea enjoyed a period of possession without posing any serious threat, and were then hit with a killer blow when Rooney added United's second after 63 minutes. Ronaldo's flick released Evra on the left flank, and when his cross avoided Terry and Berbatov, Rooney poked the ball through Ashley Cole's legs to beat Cech. It was Evra's last act as he limped off, to be replaced by John O'Shea.

Chelsea never mounted any serious response, and it was no surprise when the unmarked Berbatov slid in Ronaldo's free-kick late on to set the seal on a hugely satisfying afternoon for United and Ferguson.

It was a statement of intent that will leave the confrontational Benitez and Liverpool looking nervously over their shoulders after a win that would have increased United's belief that they can retain their crown. 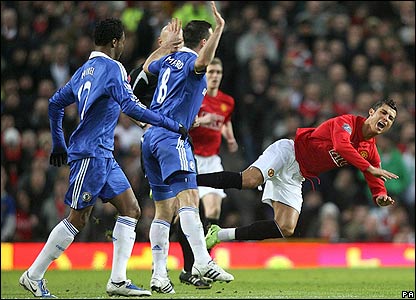 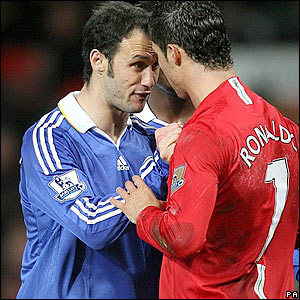 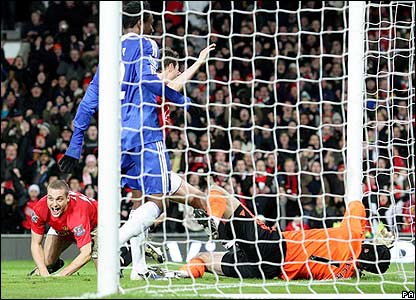