Cristiano Ronaldo was in scintilllating form (proving to the World exactly why Real Madrid are going to pay a reported Â£80m for him in the Summer) as United cruised to the World Club Cup Final with a 5-3 win over Gamba.

Reigning Asian Champions League winners Gamba gave as good as they got in a lively start in Yokohama, getting the vocal crowd right behind them and not looking like a side who had lost four of their past five games. Tomokazu Myojin hit a decent long-range shot to test United keeper Edwin Van der Sar before Carlos Tevez raced down the other end to put in an enticing cross for Ryan Giggs.

Ronaldo saw much of the ball and his typical tricks on edge of the box, drawing four defenders out of position, enabled him to fire just wide of the upright.

United took a deserved lead in the simplest fashion on 27 minutes when Giggs floated over a corner and Vidic - who later went off with a slight groin strain - rose higher than skipper Yamaguchi to nod in while keeper Fujigaya flapped at thin air.

Unmarked Anderson should have then grabbed his first goal for United but could not get a firm connection on Ronaldo's cross.

With Gamba largely consigned to off-target long-range efforts, Ronaldo put United two ahead with another uncontested header from a decent Giggs corner in first-half injury time.

With the match drifting into exhibition mode, it took an explosive turn with the 73rd minute substitution of Tevez for Rooney. As soon as the Liverpudlian trotted on Gamba had the ball in the net, Masato Yamazaki superbly slotting home from 16 yards after he was found in space in the penalty area.

Yet, with the next attack, Darren Fletcher drifted a through ball over the top for fellow substitute Rooney who, after failing to control the ball on his chest, pounced to scramble a left-footed shot across the body of Fujigaya. Minutes later Fletcher headed in smartly himself after Patrice Evra whipped in a dangerous cross from the left wing.

And the rapid goal rush continued when Rooney grabbed his second in the 78th minute, the England striker cleverly toe-poking the ball low into the goal after great build-up play from Nani then Giggs.

But with the Premier League champions cruising at 5-1 up, captain Gary Neville was adjudged to have handballed Bando's cross and Endo calmly slotted in an excellent penalty. Gamba then lifted the atmosphere to new to hit an unlikely third as Hashimoto lashed the ball into the top corner from the edge of the area with Van der Sar brilliantly beaten. 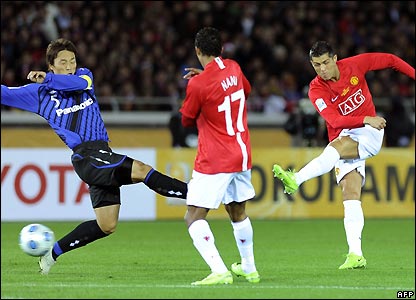