Cristiano Ronaldo limped off just after half-time after taking another beating from the opposition - with NO yellow cards given out for any of the lunges aimed at him. United left it late, but ran off with all three points in the dying minutes!

The three points will come as huge relief to Sir Alex Ferguson, who watched on from the stands as he completed his touchline ban. He will have looked on for much of it in utter frustration as Sunderland came with damage limitation in mind after a week in which they lost manager Roy Keane.

Ronaldo had started off the game with the intention on marking a week in which he was named Ballon d'Or trophy with a star-studded performance, but ended it midway through the second half as he walked off injured.

A mazy run early on had earned United a free-kick on the edge of the box which he squared for Rooney to bring out another smart stop from Fulop. Ronaldo almost stabbed in from close range after a corner was misjudged by everyone. Rooney volleyed wide and some slack play from ex-United star Dwight Yorke let in Ji-Sung Park only for Fulop to come out swiftly to smother the danger.

Darren Fletcher twice threatened either side of half-time, but just failed to find the target with either effort. Rooney again went close and Carrick had a low shot which Fulop got down to keep out.

Sunderland were close to a goal completely against the run of play when El Hadji Diouf escaped down the left and his centre almost deceived Edwin van der Sar, who made use of his legs to keep it out.

The United fans, who had seen their side put five past Blackburn in midweek, became increasingly agitated at the lack of goals but the chances continued to come. Berbatov missed a glorious headed chance from a pinpoint Carrick cross and substitute Carlos Tevez dragged just wide after being set-up by Rooney. Teemu Tainio threw his body in to block an Anderson effort as the game moved towards injury time.

But as Sunderland began to sniff a potential winner, United went forward and when Carrick's shot came back off the post, Vidic was in the right spot to send the home fans home happy. 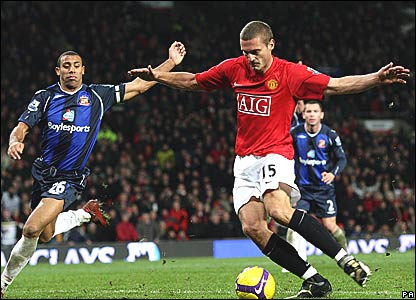