Cristiano Ronaldo was in sparkling form as Manchester United booked their place in the Champions League Final in Rome! Two goals, including another wonder-strike of a free-kick, secured the victory for United, and will see them face Barcelona or Chelsea on May 27th!

Arsenal attempted to crank up the atmosphere inside the Emirates by placing thousands of flags on seats around the stadium but two early blows from United ensured they were swiftly lowered.

United were desperate for the away goal that would leave Arsenal facing a mountainous task and they were gifted it via an error from Gibbs. He looked comfortably positioned to clear Ronaldo's routine cross but he slipped and Park was on hand to take advantage by sliding in to lift a finish over Almunia.

Van Persie fouled Ronaldo 40 yards out and while his strike was sweetly-struck and dipping, Almunia must take responsibility for moving too late to save an effort that arrived at a comfortable height.

United were in complete control and Ronaldo was just off target with a header from Anderson's corner.

Arsenal had been dominated to such an extent that they were reduced to ignoring Wenger's long-held philosophies as they launched aimless balls in the direction of Emmanuel Adebayor and Van Persie. Their only response was a tame header from Fabregas that provided little more than catching practice for Edwin Van der Sar.

If Arsenal hoped the interval would inspire some remarkable transformation in a one-sided encounter, they were to be disappointed as United simply resumed with the same air of superiority.

Ronaldo tested Almunia with a low shot at his near post before he added United's third - a goal that summed up the quality of his side's performance.

From an Arsenal corner, Ronaldo found Park just 20 yards from his own penalty area. He played in Rooney and when he served up a perfect pass, there was Ronaldo to complete a picture goal with a finish high past Almunia.

It afforded Ferguson the luxury of being able to remove Rooney and Patrice Evra, players who would have missed the final had they had picked up another yellow card.

Ronaldo's second goal of the game after 61 minutes summed up his side's display in the space of a few devastating seconds.

Arsenal were undone from their own corner by a superb sweeping move that also involved starring roles for Park and Wayne Rooney before Ronaldo completed the formalities with a flourish. It rubber-stamped United's passage into a final against Chelsea or Barcelona in Rome on 27 May - and on this evidence they will take some stopping.

The only blot on United's otherwise perfect night came 16 minutes from time when Darren Fletcher was sent off by referee Roberto Rosetti, who ruled the midfielder had fouled Cesc Fabregas as he raced in on goal. Robin van Persie's penalty will not cause United as much pain as Fletcher's suspension for the final.

BRING ON CHELSEA or BARCA 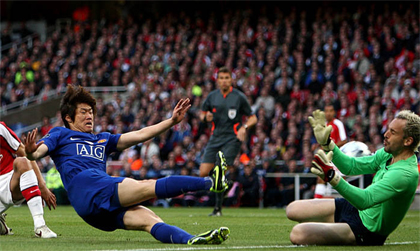 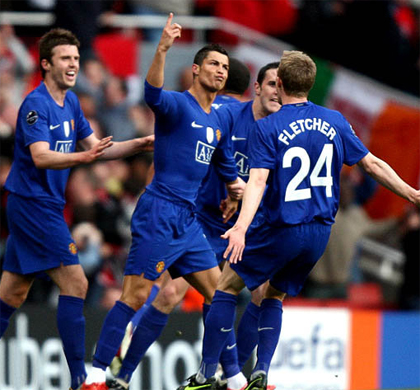