It was Ryan Giggs following up on a sublime Cristiano Ronaldo strike, who gave Manchester United their equaliser in the dying seconds, with the Scottish unable to keep the Reds at bay for the full 90 minutes.

The match started at a frantic pace, with Giggs, partnering Carlos Tevez up front, looking in the mood to inflict damage on Celtic's European hopes. A brutal challenge by Barry Robson on his international team-mate Darren Fletcher allowed Ronaldo to have a crack at goal, though his free-kick sailed a few yards over Boruc's bar.

If the opening exchanges were characterised by passing and shooting that lacked precision, the opening goal was an example of perfect finishing. A speculative header found Gary Caldwell at the edge of the United box and his cushioned header set up McDonald, in the inside left position, who remained composed to lob Ben Foster, in only his second start, from 14 yards. It was Celtic's first goal in the Champions League this season and the first conceded by the cup holders.

United responded by increasing the pace of their play. Michael Carrick, Tevez, Fletcher and Ronaldo had Strachan's men pinned back. Ferdinand volleyed an awkward ball over from three yards, a Vidic header was cleared off the line by Celtic captain Stephen McManus and the same player went close from one of many United corners.

Former Villa striker Maloney offered the home defence occasional relief. On the half-hour mark he cut inside from the left wing and rifled a dipping shot directly at Foster, who gathered well.

United looked most menacing when they played the ball quickly through midfield. In one such spurt, Giggs seized on an error by Paul Hartley, ran at the Celtic rearguard and ought to have tested Boruc. Instead he slid the ball wide of Nani and the chance to equalise was gone.

For all the Red Devils' superior technique and movement, in open play Celtic were able to frustrate the visitors on their raids. On numerous occasions, Caldwell and McManus and a retreating midfield got in the way of United's efforts at goal.

Ferguson's half-time talk encouraged United to up their game at the re-start, but not before Maloney curled a long-range shot in at Foster. In a raucous atmosphere, the Celtic fans cheered their team on as they stymied successive waves of United attacks. Caldwell cleared a dangerous low cross by Tevez, then a low left-footed shot by Ronaldo found the grateful gloves of Celtic's Polish keeper Boruc.

Substitute Berbatov came close when his flick-on from five yards was cleared off the line by Maloney. Rooney came on for Tevez for the last 20 minutes and his first involvement in the game was a long-range shot which Boruc turned round the post.

Boruc was unable to hold a thunderous swerving shot by Ronaldo from 25 yards and in rushed the veteran Giggs to head home as Boruc lay helpless. United could have snatched a victory in the final seconds when the ball was played into Berbatov. His shot on the turn whipped past Boruc's right-hand post and Celtic's slim chances of reaching the knockout stages remained intact. 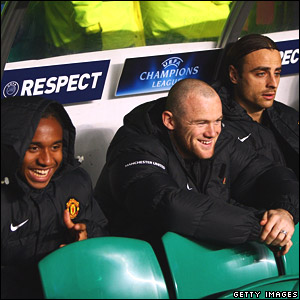 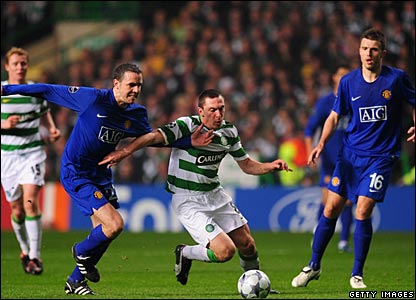 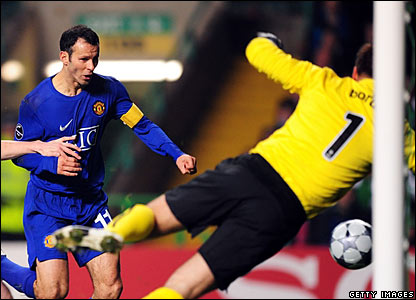