Cristiano Ronaldo boosted his goal tally with another two goals in a game United played some scintillating football in, but could have been embarassed!

United have really started to find their form after a quiet start to the season and have now won eight of their last nine fixtures while playing with increasing style and verve. Against Hull it was as if the United forwards, energised and challenged by a sublime piece of play from Dimitar Berbatov against West Ham on Wednesday, were all trying to showcase their talents.

Ronaldo used the bottom of his boot to cushion a long ball into the path of Berbatov in only the third minute. The Bulgarian's cross-cum-shot was controlled by Ronaldo, whose shot on the turn with his left foot went in off the post.

With the goal coming so early, the situation looked ominous for the visiting team, but United were guilty of over-playing time and again, with flicks, feints and elaborate turns the order of the day despite their slender lead. Occasionally a Hull player was made to look foolish - one turn from Berbatov leaving George Boateng chasing shadows while Ronaldo picked out a team-mate despite looking in the other direction.

But the visiting team would not be cowed, chasing and challenging their illustrious opponents. And the Tigers stunned the vast majority of the crowd when Cousin brilliantly headed his team level at the near post from Andy Dawson's free-kick.

United's electrifying play suddenly acquired a great deal more potency and a swift break culminated in Berbatov passing to Carrick, whose precise low strike with his left foot also went in off the post.

The home team effectively sealed victory shortly before the break when Ronaldo headed the third from Nani's corner, the ball taking a slight deflection off Paul McShane.

Poor defending allowed a corner to reach Vidic low down and he guided the ball past Myhill, who should have done better.

It was starting to look like a case of damage limitation for the Tigers - but it was Hull who scored next. Substitute Mendy brilliantly lobbed the ball over the advancing Van der Sar. Vidic almost pulled off a brilliant clearance but the linesman correctly ruled the ball had crossed the goal-line before the Serb booted it clear.

Myhill saved a venomous strike from Rooney but Hull's never-say-die spirit ensured a dramatic final few minutes. Mendy was brought down by Ferdinand and Geovanni made no mistake from the spot.

Rooney, for one, was flustered and was lucky to stay on the field after a couple of dangerous tackles in very quick succession. He was booked for the second of them. 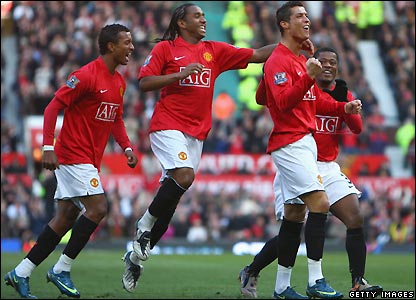 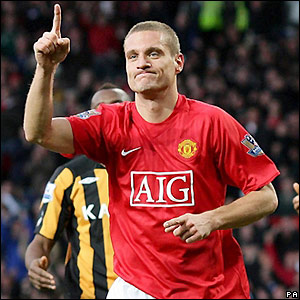