Cristiano Ronaldo made one goal and scored two himself as United 'clicked' for the first time this season, smashing poor West Brom 5-0! Ronaldo nearly had a hatrick, but uncharacteristically blasted wide from 10 yards.

United were lifted by the return of Rio Ferdinand after a back injury - but he was rarely required as the champions strolled to victory.

Michael Carrick exchanged passes with Berbatov and the Bulgarian completed the formalities with an angled finish to put them ahead after 22 minutes.

Ronaldo was guilty of squandering a glorious opening when he chipped over Carson when clean through, but his effort rolled wide.

The huge task facing Albion was made even tougher five minutes before the interval when Robinson was shown a red card by referee Styles for a meaty challenge on Park. It did not look like he had his foot raised and he appeared to get the ball, but Styles saw differently and enraged The Hawthorns by sending off the experienced defender.

The game was effectively over as a contest seconds before the interval when Carson dropped Giggs' free-kick at the feet of Tevez six yards out, the Argentine slotting home a simple finish.

United got their third on the hour when Vidic arrived to power a corner from Giggs past Carson. It was now a case of damage limitation for Albion - but United were not in the mood to allow them even that small mercy.

The fourth came after 65 minutes when Tevez released Giggs, who timed his pass to perfection for Ronaldo to score with a precise right-foot finish. Ronaldo was on target again eight minutes later when Berbatov, who looked suspiciously offside, played him in to beat Carson through his legs.

It was time for some changes from United, with Ferguson giving a debut to new Serbian signing Zoran Tosic.

It was a comfortable night for United - but not for rivals Liverpool and Chelsea who play on Wednesday. 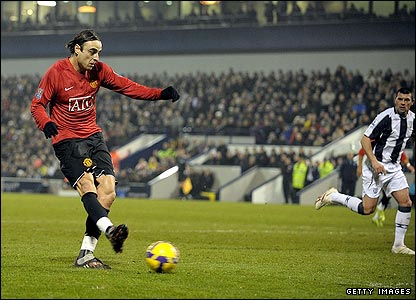 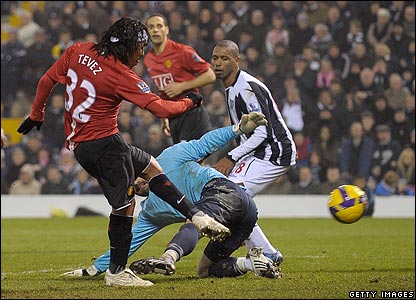 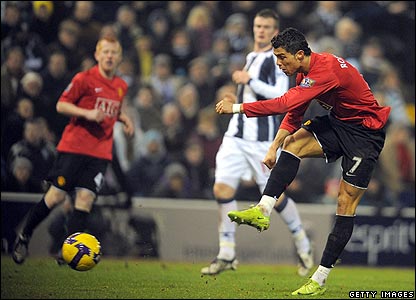