Cristiano Ronaldo was subbed early after receiving numerous kicks to his legs, and no protection from the referee! United played out a frustrating nil - nil draw that failed to capitalise on Liverpool and Chelsea's earlier draws.

United manager Sir Alex Ferguson was urging his side forward at the end and he might reflect on two points dropped, despite Chelsea and Liverpool being held to goalless draws themselves.

Both teams came into the game with form and confidence from their most recent league outings, Villa having claimed a fine win at Arsenal and United following their home demolition of Stoke. The pair were separated by just one point but there appeared even less to choose between them in the opening exchanges.

A Luke Young free-kick was headed by Martin Laursen into the path of Agbonlahor but the England striker poked his shot straight at Van der Sar. At the other end, Cristiano Ronaldo stepped in from the left wing and unleashed a venomous drive that was clawed behind by Brad Friedel, making his 166th consecutive Premier League appearance to equal David James' record.

United, boosted by the returns of Rio Ferdinand and Rooney, were initially frustrated by Villa's 4-5-1 formation, which turned into a 4-3-3 when in possession. But with United looking to get forward in numbers at every opportunity, the visitors' slick passing soon enabled wingers Ronaldo and Park to get in behind the Villa full-backs.

On 38 minutes Ronaldo sent Park racing through on goal but, just as the South Korean prepared to shoot, Ashley Young slid in with a perfectly-timed challenge to avert the danger. With Villa struggling to keep hold of the ball, United continued to flow forward and a sliding Park was inches away from converting Rooney's enticing right-wing cross.

Martin O'Neill's men looked vibrant after the re-start and Van der Sar was forced to concede a corner with Ashley Young's intended cross heading towards the top corner.

Villa were beginning to play without inhibition and, on the hour-mark, felt they should have had a penalty when Agbonlahor was felled after out-pacing Vidic on the left, although replays suggested Vidic won the ball.

United wasted a glorious chance when Michael Carrick hooked over the Villa defence for Rooney, who found himself clean through but fired horribly high and wide from close range. Ferguson replaced an out-of-form Carlos Tevez with Nani as United continued to probe from wide areas but clear-cut chances were not forthcoming and Villa reminded the reigning champions of their threat when Ashley Young's drive was well saved by Van der Sar.

Vidic had to be alert to scramble clear after James Milner beat John O'Shea and crossed but in the end neither side could breach the other's back four. 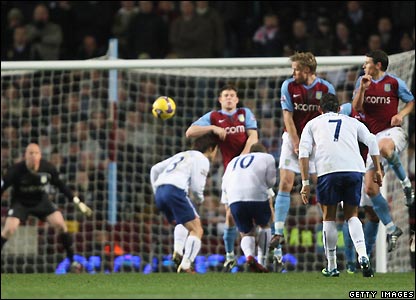 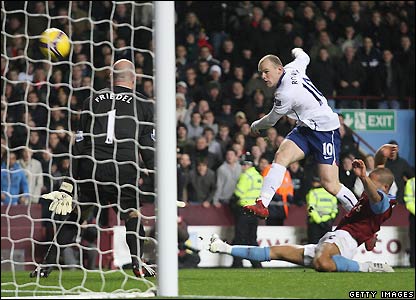