Cristiano Ronaldo wasn't a his fluent best (might have something to do with the constant ankle-tapping and blatant fouls he's been on the end of recently?!) as United lost out to Fulham - leaving them perilously close to Liverpool.

Sir Alex Ferguson, who at least saw Chelsea beaten by Spurs on an incredible day in the Premier League, will need all his managerial experience to galvanise his troops ahead of the visit of Aston Villa on 5 April.

In truth, Ronaldo, like his team-mates, was completely out of sorts, harried into giving the ball away with shocking regularity in a first half in which Fulham were rampant.

Roy Hodgson's side, who had leaked seven goals without response in their two previous games against United this season, peppered Van der Sar's goal with 10 shots before half-time, while limiting the opposition to just two.

Former Fulham keeper Van der Sar did well to keep out Zamora's header from a corner, but the rebound came straight back to the striker and as he nodded towards goal, Scholes instinctively put his arms up. Scholes knew what was coming as he stayed on his knees, looking ruefully at the ground. As the midfielder trudged down the tunnel, Murphy confidently stroked the penalty high into the net.

Fulham continued to take the game to United, with Zamora in particular terrorising the visitors' creaking defence. They should have had a second when Andrew Johnson miscontrolled and then Clint Dempsey blazed over from a good position.

And it looked as if Fulham would pay for failing to make the most of their dominance as United came out fighting after the break. Dimitar Berbatov, who landed awkwardly on his ankle at the end of the first half, was replaced by Rooney at half-time and the change gave United some much-needed urgency.

United fans were on their feet when Ronaldo set up Ji-Sung Park in front of goal but Schwarzer not only kept his effort out but was up quickly to keep out Rooney's follow-up.

With United pushing forwards, Fulham wrapped up victory through Gera, who had his back to goal when he collected Johnson's cross but managed to flick the ball up and hook it home.

Referee Dowd made sure that he was at the centre of things by sending off Wayne Rooney for throwing the ball back to where the free-kick should be taken from 'too aggressively.' Clown. 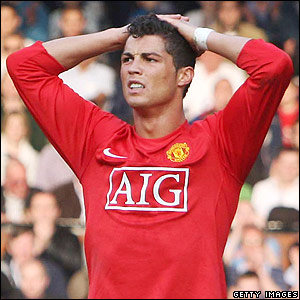 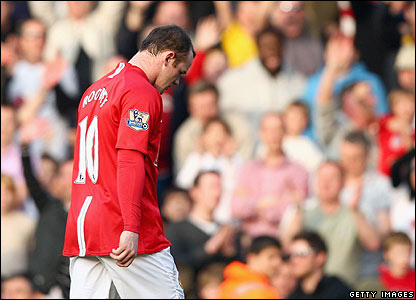