United get their Point

Cristiano Ronaldo had that mad grin on his face again as Manchester United finally got over the finishing line in the Premier League, to win their third successive Premiership title! The game wasn't great, but United did enough to earn the point they needed.

Wayne Rooney missed United's best chance with a first-half header, and there was an intriguing cameo when Old Trafford voiced its resounding disapproval when the popular Carlos Tevez was substituted in what could prove to be his final home appearance. But nothing could overshadow United's achievement - or the joy of players, fans and management - as the presentations were made after the final whistle with club captain Gary Neville lifting the Barclays Premier League trophy.

Andrey Arshavin was restored to Arsenal's side after illness, and he saw plenty of possession in a first 45 minutes that saw Arsene Wenger's side acquit themselves far better than when the pressure was on in the recent Champions League semi-final against United. The Russian provided an inviting cross for Van Persie after 13 minutes, but he headed off target with United's defence unlocked.

United's response was a Rooney header from John O'Shea's cross four minutes later. He should have at least tested Arsenal keeper Lukasz Fabianski, but directed a low header just wide.

Arsenal had a foothold in the game without putting United's defence under concerted pressure, but there was enough on show to subdue the atmosphere of anticipation inside Old Trafford. United had one final opportunity as the interval approached, but Ryan Giggs, who would later collect his 11th Premier League title medal, shot well over the top after good work on the left flank by Rooney.

United had struggled to create clear-cut opportunities, but Fabianski had to be alert on the hour to block Tevez, with Ronaldo firing the loose ball yards over the bar. It was the final contribution for Tevez, who was replaced by Ji-Sung Park. Ferguson's decision was not well received by Old Trafford, in fact it was met with open derision as the popular striker made his way to the touchline. Tevez milked the situation for all it was worth, waving to all sides of the ground in apparent farewell - going a step further by acknowledging the fans after taking his place on the bench.

Ronaldo thought he had scored the goal that rubber-stamped the title with 12 minutes left, but his 20-yard angled free-kick dipped just wide with Fabianski beaten.

Van Persie then shot straight at Van der Sar as United looked to have settled for the stalemate that would see them retain their crown. The Dutch striker gave Old Trafford one final scare when his free-kick was bravely blocked by Michael Carrick. Seconds later, referee Dean sounded the final whistle and United were crowned champions again. 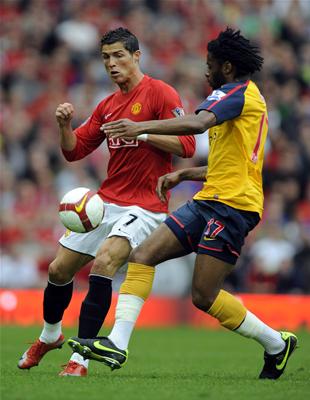 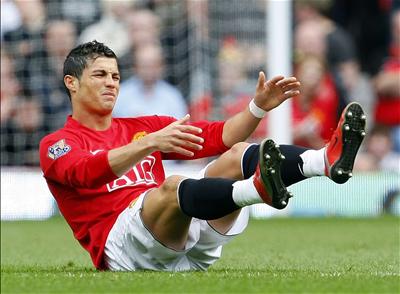