Manchester United and Cristiano Ronaldo have gone three points clear with an impressive display against Portsmouth, which leaves them just two games from the Premier League title!

Rooney was United's main source of inspiration as they looked to capitalise on Liverpool's failure to beat Arsenal in Tuesday's 4-4 classic at Anfield. This was no classic, indeed for long spells it was distinctly low-key, but the result mattered more than the performance and United boss Ferguson looked a happy man as he strode away at the final whistle, to receive further good news that rivals Chelsea had been held to a draw by Everton at Stamford Bridge.

Ferguson, predictably, made nine changes from the side that lost the FA Cup semi-final against Everton at Wembley on Sunday. And the significance of Rooney's return was emphasised when he enabled United to shake off early lethargy by putting them ahead after nine minutes. Anderson started the move with a raking pass to Giggs on the left flank, and as Pompey appealed in vain for offside, he delivered an inviting cross for Rooney to slide home from point-blank range.

There was concern amid the celebrations as it became clear that Gary Neville, whose season has been dogged by recurring injury problems, was struggling again and he limped off, to be replaced by John O'Shea.

Rooney's goal deflated Portsmouth's early confidence, and the remainder of the first half was a tale of United creating - and wasting - a succession of presentable opportunities. O'Shea's header was cleared off the line by Nadir Belhadj and James plunged bravely to block Giggs after he was cleverly played in by Rooney. Giggs was the culprit again six minutes before the interval when Sol Campbell unwittingly set Cristiano Ronaldo free with a misplaced header but the veteran bundled the resulting cross wide from six yards.

There was one final opportunity for dominant United in the dying seconds of the half, when Darren Fletcher pulled his shot wide after being set up by Rooney.

Rooney had been at the heart of all of United's best work, and an instinctive flick again released Giggs in the area, but James was swiftly off his line to make a decisive claim.

United had a rare anxious moment on the hour when Glen Johnson broke free in the area and forced the previously unemployed Van der Sar to push his low cross to safety. Substitute Pennant then squandered a good opportunity when he arrived unmarked in the area, but instead of shooting he pulled a poor cross behind Crouch, who could only steer a volley wide.

United's second-half display had plunged into mediocrity, but it was Rooney again who almost lifted Old Trafford's spirits when he raced clear into the area, only for James to once again come to Pompey's rescue.

Ferguson's decision to replace Anderson with Carrick was something of a surprise, but it produced the required effect as the England midfield man sealed the points and United's return to the top of the league with eight minutes left. Scholes must take huge credit, with a glorious pass that slid into the path of Carrick, who shot across the defiant figure of James into the bottom corner.

It allowed United to relax and enjoy the closing stages - safe in the knowledge that they are firmly in charge of their own title destiny. 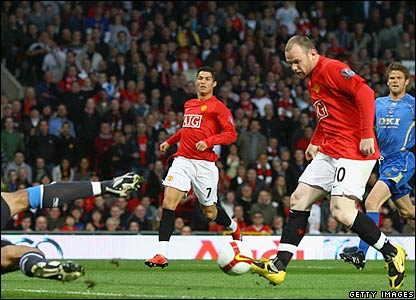 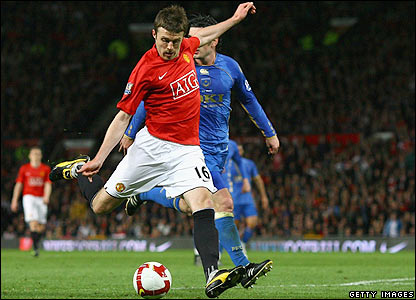 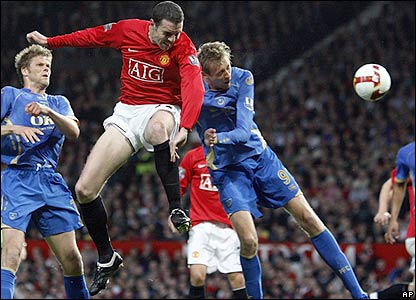