Cristiano Ronaldo sent the cross in for Wayne Rooney to knock in afer 54 seconds, but lacked the cutting edge of last year, as United held on to a drab 1-0 win over Wigan Athletic. Manchester United closed the gap on Premier League leaders Liverpool to two points - with a game in hand - as they struggled to victory against Wigan.

United were not at their most impressive, but manager Sir Alex Ferguson will simply be delighted to have built on the 3-0 win against title rivals Chelsea with another vital three points to move into second place in then table.

Ferguson made five changes from the side that beat Chelsea so comfortably on Sunday - and they carried on where they had left off by taking the lead inside a minute. Newly crowned Fifa World Player of the Year for 2008 Ronaldo escaped down the right flank, and his cross was the perfect invitation for Rooney to steer in the simplest of finishes from close range.

It was Rooney's last meaningful action as he fell victim with a hamstring strain five minutes later and limped off, to be replaced Tevez. And the Argentine should have doubled United's lead after 25 minutes. He was sent clear by John O'Shea's clearance, but his touch let him down as he rounded Kirkland and the chance was lost.

The visitors needed to increase the tempo after the break, but they only succeeded in picking up three yellow cards in quick succession. Titus Bramble and Paul Scharner were booked for fouls on Dimitar Berbatov and Tevez, while Amr Zaki was cautioned for breaking too soon from a defensive wall.

Wigan then enjoyed their first sustained spell of pressure, with United forced to defend and goalkeeper Edwin van der Sar saving well from Maynor Figueroa's volley - a threat caused by his own poor throw.

The home side's display had been strangely lacklustre in the second half, and Wigan were being given plenty of encouragement in their belief that they could fashion an equaliser. Bruce's side almost drew level with nine minutes left when Antonio Valencia's fierce rising drive flew just inches over.

Berbatov almost provided the hosts with the breathing space they badly needed, curling a 20-yard effort narrowly wide with the outside of his foot.

Wigan ended the game in United territory, but never seriously threatened to snatch and equaliser and deprive the champions of victory. 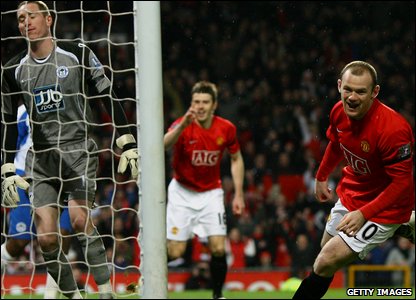 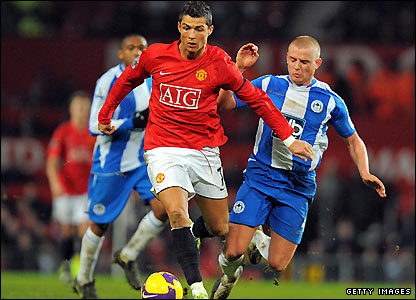