Cristiano Ronaldo sealed the win with a fantastic headed second goal, sending Manchester United through to the Quarter Finals of the Champions League, knocking out one of the early favourites in the process.

Inter dominated for spells, but there was an inevitability that they would be punished for their failure to score - and so it proved as United delivered the telling blows in an engrossing battle. United never touched the heights, but once again they proved that they have perfected the habit of winning even when their best form eludes them.

United will need to produce better as the champions of Europe continue on what they hope will be the road to Rome and another final, but they deserve the utmost admiration for the resilience they displayed in grinding out a priceless win.

Vidic was recalled after his first leg suspension to bolster United's defensive resources, but it was his threat at set pieces that reaped dividends.

Mourinho, the great defensive organiser, will have been mortified to see the Serbian, hardly a secret weapon on these occasions, rise almost unchallenged to head Giggs' corner past Julio Cesar. And yet, instead of settling the early nerves United may have been experiencing, the holders failed to build on Vidic's goal and barely survived a harrowing spell of pressure from Inter.

Ibrahimovic is one of the great enigmas of European football, often failing to justify his glowing reputation when the stakes are at their highest. And he should have drawn Inter level after 28 minutes when he stole in unmarked on to the end of Maicon's free-kick, only to send a downward header against the bar with Edwin van der Sar beaten.

United were careless in possession, which did not help their cause with Inter growing in confidence as the half progressed. Stankovic's long-range shot was turned to safety by Van der Sar before United relieved the pressure to almost grab that crucial second goal eight minutes before the interval.

Inter ended an absorbing opening half in the ascendancy, with Stankovic adding to the catalogue of missed opportunities when he somehow steered Ibrahimovic's pass over the top from point-blank range. Mario Balotelli's clever pass then released Ibrahimovic for a volley that beat Van der Sar but flew inches wide.

Mourinho must have felt a real surge of optimism at the start of the second half, and attempted to inject fresh impetus into his side replacing the sadly pedestrian Patrick Vieira with Sulley Muntari. If he was upbeat about over-turning United again, it was a feeling that did not last for long as Ronaldo headed the second goal United craved after 48 minutes. Rooney's cross was an open invitation for Ronaldo and he rose to flick an emphatic finish past the helpless Cesar.

The scoreline was a harsh reflection on the contribution Inter had made to the game, but they paid the ultimate price for their failure to make a lengthy period of supremacy count.

United were being offered more space as Inter went for broke, and Cesar needed to be at his best again to deny Rooney, recovering well to block Dimitar Berbatov's shot after he was set up by Giggs. Ronaldo tested Inter's defiant keeper one final time with a long-range effort, but by then the fight had drained out of Inter and United were on cruise control to the quarter-finals. 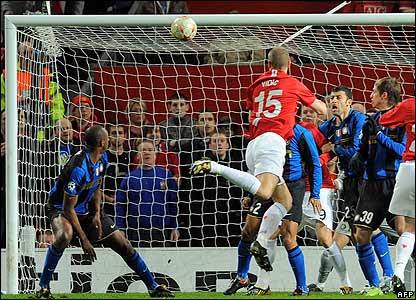 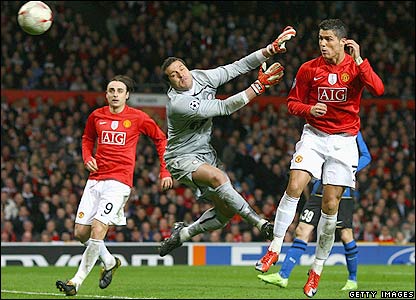 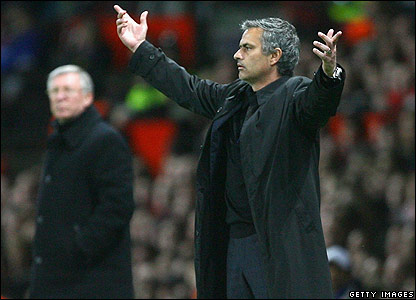