Cristiano Ronaldo kept Manchester United at the top of the table with a well-taken penalty to see off the challenge of Everton. United deserved their victory and could have won by more, but they were made to work for the win by an Everton side displaying all their trademark defensive resilience.

The first 45 minutes took the predictable shape of United working all their attacking options, but running into Everton's blue wall of defiance. Former United goalkeeper Howard was in early action, making a last-ditch save to turn away Park's cross and then blocking Tevez's effort from only eight yards with his legs.

Ronaldo came close to piercing the Everton rearguard after 25 minutes when his low shot took a deflection, only to strike a post and roll agonisingly across the goal-line to safety.

Everton's best form of response was the left-sided partnership of Steven Pienaar and Leighton Baines. They worked a succession of promising openings, but the quality of delivery was poor and Van der Sar was rarely troubled.

The breakthrough came only a minute before half-time, and in the most frustrating manner possible for Everton as Arteta conceded a needless penalty. Everton's Spanish midfield man flicked out a leg at Carrick as he raced into the area, and even though referee Mark Halsey let play progress, he then awarded a penalty when United gained no immediate advantage. Ronaldo scored comfortably from the spot - and in the process put an entirely different complexion on the second half.

United were denied what looked an even more clear-cut penalty than the one they were awarded when Carrick was once again brought down, this time by Joleon Lescott, two minutes after the break but Halsey waved away their justified appeals.

Tevez had been an industrious figure for United, and he twice threatened to grab the crucial second goal, firing narrowly over then forcing a low save out of Howard from 20 yards.

Van der Sar had been largely unemployed, but he was in the action on the hour when he held on to Arteta's low free-kick from fully 30 yards. But it was still United posing all the serious questions and Howard needed to be alert to turn Tevez's deflected free-kick over the top.

Everton tried to press as time ran out, but they were lightweight in attack and United ended in the ascendancy, with Howard again saving well from Howard. It was not United at their free-flowing best, but they will be satisfield to succeed against tough opponents who have taken points off Chelsea, Liverpool and Arsenal in recent times. 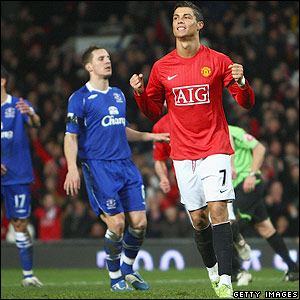 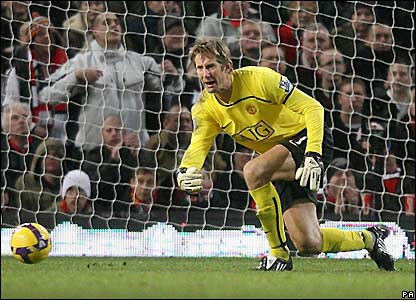