Cristiano Ronaldo was on the wrong end of quite a few ferocious challenges as an up-for-it Newcastle side stopped at nothing to win the ball! Thankfully, United had the skill and patience to get all three points anyway!

Manchester United survived the shock of conceding an early goal at Newcastle to come from behind and secure a win that tightens their grip on the Premier League title race. A rare blunder from keeper Edwin van der Sar gave Peter Lovenkrands the opportunity to give Newcastle the lead after nine minutes when he dropped a tame shot from Jonas Gutierrez.

Van der Sar returned in place of Wembley hero Ben Foster, having gone 1,302 minutes without conceding a goal in the Premier League. It was a record that survived only another nine minutes and he was solely responsible for its demise. Gutierrez's angled shot carried power, but Van der Sar went down awkwardly and spilled the ball into the path of the lurking Lovenkrands, who provided the simplest of finishes.

Newcastle were heartened by that early strike and gave a defence which has looked impregnable at times this season a torrid time in the first half-hour. Martins' pace was too much for Manchester United on occasions, and he was only inches away from doubling Newcastle's advantage with a near post snapshot.

Nemanja Vidic was then booked for hauling down Martins before Rooney restored equality with a typically opportunist finish after 20 minutes. John O'Shea found Rooney in the area, and he turned and fired a left-foot shot on the turn high past Newcastle keeper Steve Harper.

The half finished with a flare-up when Steven Taylor cuffed Cristiano Ronaldo in a collision that incensed Ferguson. Taylor was eventually booked, and he was followed after the whistle by Rio Ferdinand when he continued the debate with referee Steve Bennett.

Manchester United needed to up the tempo after the break, and their cause was helped by a moment of calamitous defending from Ryan Taylor that gifted them the lead. Rooney's long ball was a piece of quick thinking rather than a moment of inspiration, but Taylor unwisely chose to try and chest the ball back to Harper. Ji-Sung Park beat the keeper to the ball and Berbatov slid the finish into an unguarded net.

It was an uphill task for an under-strength Newcastle, and Harper was forced to demonstrate sound handling when he saved low from Rooney's drive with 20 minutes remaining. And the keeper was in action again to turn a rising drive from Berbatov over the top as Manchester United pressed forward ominously.

Newcastle showed real character until the final whistle, with both Lovenkrands and Martins testing Van der Sar - but Manchester United once again showed the vital quality of champions by digging out a victory on a night when they never touched the heights. 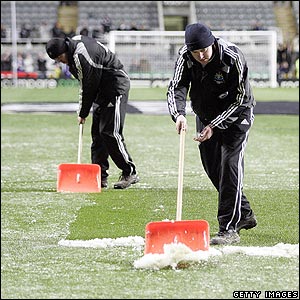 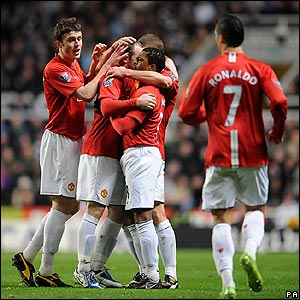 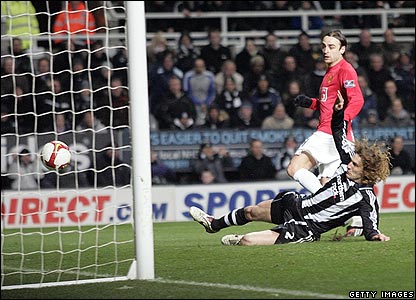