Cristiano Ronaldo was on the bench as Manchester United took on Chelsea. He was the one bright spark when he came on as a sub in the second half, but that still didn't stop Chelsea stealing an equaliser.

It stretched Chelsea's unbeaten sequence in the Premier League at Stamford Bridge to 85 games, but Sir Alex Ferguson will be frustrated that his side failed to build on a perfect start and lost their way as the game went on.

United opened with real purpose, Darren Fletcher scrambling a finish wide and Rooney hooking just off target after a poor clearance from Cech. Luiz Felipe Scolari's side suffered a serious blow three minutes later when defender Ricardo Carvalho departed with a knee injury, with Alex coming on as substitute.

United's ambition was rewarded with a deserved opener after 18 minutes, when Park pounced from close range after Cech could only parry Berbatov's shot.

Van der Sar had been having a mixed afternoon, his mood not helped by a knee injury sustained in an accidental clash with Florent Malouda. And it was no surprise when he limped off and was replaced by Tomasz Kuszczak after 31 minutes following another fumble.

Chelsea made another change at the interval, sending on Didier Drogba for Malouda, while United waited until nine minutes after half-time before sending on Ronaldo for Paul Scholes.

Joe Cole wasted another great opportunity after 65 minutes, shooting straight at Kuszczak after being released by Ballack's superb pass. And Anelka was guilty of a shocking miss seven minutes later when he was set up by Joe Cole, but he failed to even apply a touch only three yards out with the goal at his mercy.

But Chelsea were building up a head of steam and it was no surprise when they drew level with 10 minutes left. Rooney was booked for a crude lunge at Ashley Cole, and the punishment was doubled when Kalou headed Jon Mikel Obi's free-kick beyond a static Kuszczak.

And it took a desperate block from Gary Neville seconds later to deny Kalou, bravely deflecting his shot over the top as United hung on for a point. 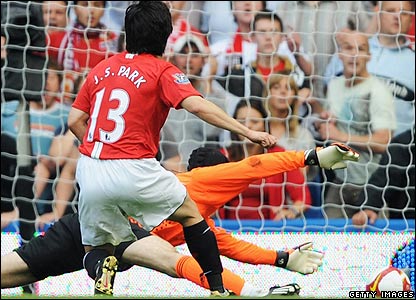 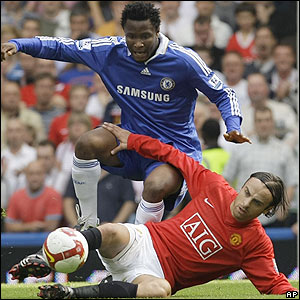 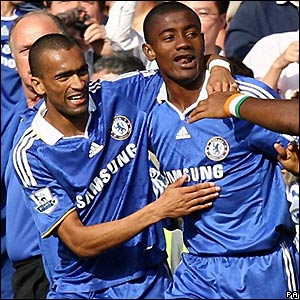