Cristiano Ronaldo was one of United's bright sparks in a game that looked to be urning out in Liverpool's favour - only for Berbatov and Tevez to come to the rescue at the very last minute! Dimitar Berbatov's late winner sent champions Manchester United to the top of the Premier League table for the first time this season.

In the opening exchanges United dominated possession, while Bolton relied on set-pieces and long balls to trouble the visitors but found Nemanja Vidic and Evans in fine form.

It took until the 35th minute for the first real chance of the game when Ronaldo's header was beaten out by Jaaskelainen. The Bolton keeper was called into action twice again before half-time, first superbly stopping Ronaldo's fierce, low 20-yard free-kick and then routinely keeping out Anderson's long-range effort.

If Ronaldo troubled Bolton with his free-kicks, he was less assured with his final pass, while Tevez struggled to hold on to the ball up front. Anderson and Michael Carrick were also erratic with their distribution and in truth United lacked the guile that Rooney, who was missing with a hamstring injury, provides.

Ronaldo again went close with a free-kick while Bolton offered very little, seemingly content to settle for a vital point.

With 17 minutes remaining Ferguson called for the cavalry and Ryan Giggs, making his 550th league appearance, and Paul Scholes entered the fray. The veteran duo sparked United into life as they went in search of the vital goal.

Tevez went close with a header while Ronaldo also saw another powerful free-kick kept out by Jaaskelainen.

But just as it looked as if the game would end goalless, Tevez escaped the attention of two defenders before crossing for Berbatov, six yards out, to head powerfully past Jaaskelainen to win the game for United. 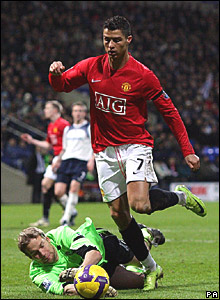 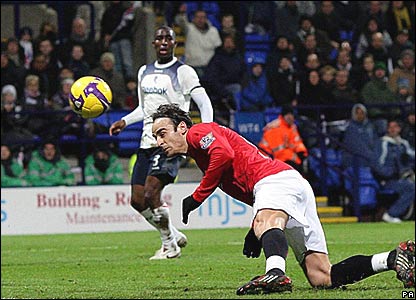