Cristiano Ronaldo is now a World Champion! Having been recognised as the best Player in the World by FifPro and France Football (and teh FIFA Award to follow in February), Ronaldo's Manchester United became champions of the World after a 1-0 over South America's best team!

United dominated possession from the start. Quito's best chance came early on when Jairo Campos found space to meet Alejandro Manso's whipped free-kick in front of goal but somehow put his shot wide. But the South American champions were on the back-foot from that point onwards and were grateful to Cevallos for three good saves in the first 20 minutes.

Cevallos did well to push away a Rooney snap-shot from the edge of the area and repeated the trick to keep out another ferocious effort from the England striker soon after - although this time he will have been relieved that the ball bounced wide after it had span from his grasp. And the 37-year-old was soon in action again, flinging himself to his right to keep out a diving header from Tevez after some good work from Cristiano Ronaldo.

Ronaldo looked keen to impress the crowd at the Yokohama International Stadium, showing off some fancy footwork at every opportunity, with only an end-product missing from his play. United's failure to score was not through lack of effort, or chances, and Cevallos was again in the right place at the right time to palm away Park's stinging shot before parrying another effort by Tevez. Park should have done far better before the break when Anderson's long ball fell to him at the back post - but he miscued horribly and sliced his attempted chip well over.

It looked like Ferguson's men would be punished for failing to take those chances when Vidic was dismissed for his clash with Bieler with both players grounded - and the red card also means he will be suspended for the first leg of United's Champions League clash with Inter Milan in February. United's 10 men were forced to reshuffle and Tevez was replaced by Jonny Evans, who filled in at the back. But it made little difference to the pattern of the game as Quito still lacked ambition and United continued to come forward.

Rooney and Ronaldo had been by far the best performers on the day and they combined to deadly effect with 17 minutes left. The Portuguese winger teed up Rooney on the left-hand corner of the penalty area to bury a low shot in the far corner of the net. Quito, at last, attempted to respond but the closest they came to an equaliser was another effort from range by Manso that Van der Sar tipped over. Earlier on Sunday, Japan's Gamba Osaka secured a third-place finish with a 1-0 win over Mexican side Pachuca. 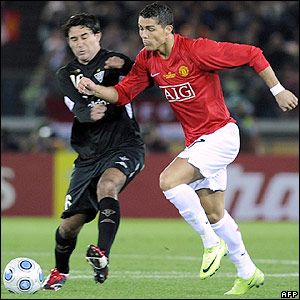 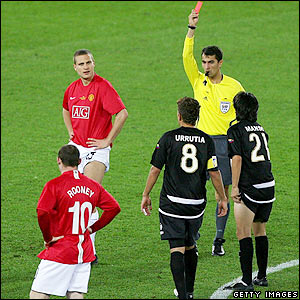 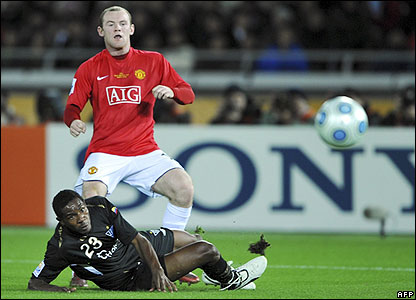 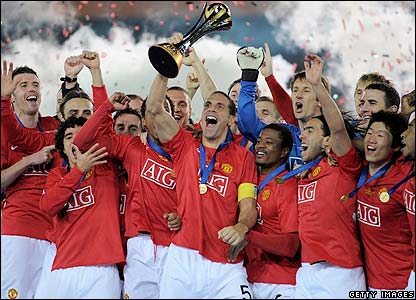