Cristiano Ronaldo nearly grabbed a goal (and perhaps should have!) in the dying minutes as Manchester United outclassed a hard-working Aalborg team to claim their first three points of the Champions League campaign.

United boss Sir Alex Ferguson kept faith with Berbatov, despite a lacklustre start to his Old Trafford career, but he made an undistinguished start with a dreadful miss after five minutes.

Aalborg keeper Karim Zaza's clearance ricocheted off Ronaldo straight to Berbatov, but he shot wide of an open goal. Zaza then had to block a drive from Rio Ferdinand after Nemanja Vidic flicked on Nani's corner.

United suffered a blow after 16 minutes when Scholes was stretchered off with a knee injury following a challenge by Thomas Augustinussen. Giggs came on and demonstrated his enduring quality six minutes later with a perfect through ball into Rooney's path and he slipped home a simple finish.

Rafael had looked promising at right-back, and he almost showed his goal-scoring talent with a fine left-foot shot that was turned over by Zaza.

United needed to kill the game off, and they did so when Berbatov was gifted his first goal following his Â£30m move from Spurs in the 55th minute. Augustinussen's dreadful control presented Berbatov with possession on the edge of the area, and he wasted no time in hammering an emphatic finish past Zaza.

There was another concern for United after 58 minutes when Rooney pulled up injured and limped off to be replaced by Carlos Tevez.

Tevez had the ball in the net almost immediately, but referee Olegario Benquerenca ruled out the effort for handball. United were now carving out a succession of chances, with Ronaldo failing to take advantage of good work by Tevez and the Argentine shooting wide after cutting in from the left.

The Bulgarian almost repaid the compliment with six minutes left when he set Ronaldo racing clear with a glorious pass, but he was unable to provide the final flourish to a comfortable win.

A job well done by United - but at what cost in terms of injuries remained to be seen as the players prepared to fly back to Manchester. 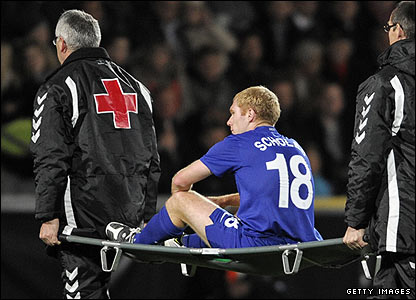 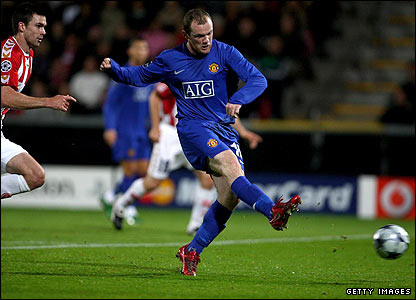 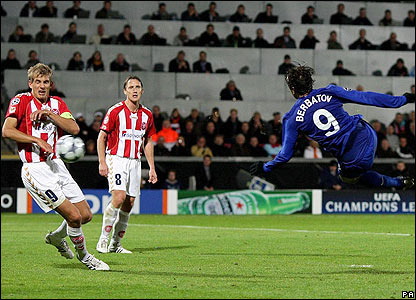