United played with a verve the visitors never came to terms with and made light of the absence of injured Rio Ferdinand, Wayne Rooney and Ryan Giggs.

The game was barely two minutes old when a robust challenge from Amdy Faye on Tevez gave Ronaldo the type of chance he craves. And the Portuguese winger duly stepped up and struck a blistering free-kick that dipped and swerved in front of Thomas Sorensen, who allowed the ball to slip through his grasp.

Ronaldo could have had a second soon after as United piled on the pressure, but Faye threw himself in the way of his rasping shot.

Stoke dug in and a trademark long throw from Rory Delap was headed towards his own goal by John O'Shea, only for Edwin van der Saar to claw the goalbound ball to safety. Despite gaining some decent possession in attacking areas the visitors failed to create many chances and found themselves with a bigger mountain to climb when Carrick doubled United's lead just before the break. The midfielder collected Ronaldo's pass on the edge of area and despite having four defenders around him, he managed to rifle home a left-footed shot from 16 yards.

After the break the home side looked to put the result beyond doubt and Berbatov did just that as he controlled a cross from Carlos Tevez and volleyed home.

Ronaldo was now running the show and twice tested the Stoke keeper from distance as United hunted a fourth before Tevez tried his luck and curled a shot narrowly wide. Faye was then involved in a confrontation with Ronaldo as the Portugal international aimed a kick at the Stoke midfielder, an incident missed by the officials.

Angolan international Manucho was introduced as a second half substitute by United but headed wide when unselfishly played in by Ronaldo before Berbatov saw an effort cleared off the line by Danny Higginbotham.

The fourth goal eventually came courtesy of Welbeck, another substitute brought on by Ferguson, who gave Sorensen no chance with a powerful shot from 25 yards.

Ronaldo then capped a fine individual and team performance with his second free-kick two minutes from time, struck past the left-hand edge of a badly positioned wall. 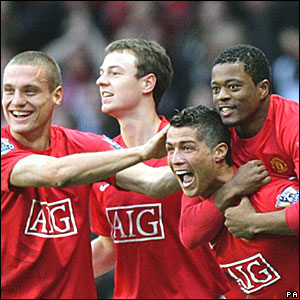 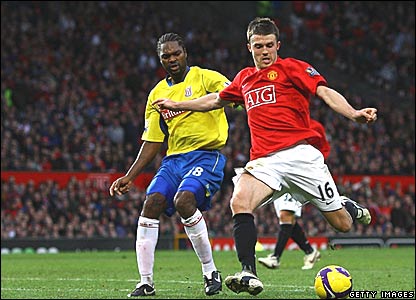 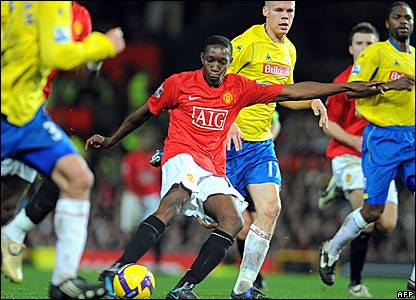