Cristiano Ronaldo scord the first goal and the winning goal as Man United fought back sensationally from 2-0 down at half-time to win 5-2! A Ronaldo penalty set the ball rolling in teh right direction, and he scored teh third, which effectively secured all the points for United, with a diving header from close range.

At the start of the match Ronaldo, who had been forced to skip a shocking double-footed challenge from Wilson Palacios early on, went close with a header from a Nani cross. But, for all United's possession, it was Spurs who took the lead. Vedran Corluka curled in a cross from the right and Bent got the better of Rio Ferdinand to crash home his 17th goal of the season from six yards.

Tottenham went 2-0 up moments later when Modric converted Aaron Lennon's cross at the far post after the winger had jinked his way past Patrice Evra on the right.

With half-time looming and the Old Trafford faithful sounding increasingly anxious, a Ronaldo volley came within a Gomes fingertip of pulling a goal back.

United boss Sir Alex Ferguson replaced the lacklustre Nani with the far more industrious Carlos Tevez at the break. And the Argentine, who could leave Old Trafford at the end of the season, tested Gomes when one-on-one inside the hour.

Two minutes later, Carrick burst into the box and nipped the ball around Gomes, who was ruled to have tripped the midfielder as he dived at the ball. The Tottenham players were incensed with Howard Webb's decision, as was Spurs manager Harry Redknapp on the touchline. But they were powerless to stop Ronaldo from reducing the deficit from the penalty spot.

If there was any doubt about the first goal there was none about the equaliser. Rooney blasted home from outside the box after Rafael and Berbatov had combined to set up the striker.

Just one minute later, United were in front, Rooney crossing from the left for Ronaldo to head home their third. It was a phenomenal turnaround, although not quite as grand as the recovery in 2001 at White Hart Lane when United won 5-3 after trailing 3-0 at half-time.

The misery continued for the shell-shocked visitors. Rooney made it 4-2 when his volley from Ronaldo's delicate cross crept over the line despite the scrambled efforts of Jonathan Woodgate.

Having scored four goals in just 14 minutes, United, perhaps sensing a need to improve their goal difference, poured forward in search of a fifth. Remarkably it arrived, courtesy of the boot of former Tottenham player Berbatov. His initial header was saved by Gomes, but the Bulgarian stabbed home the loose ball to cap a remarkable afternoon. 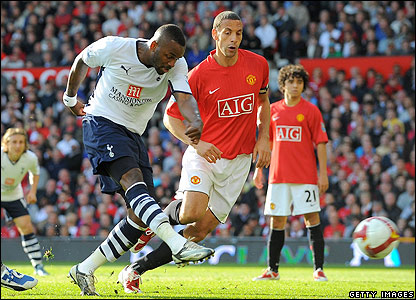 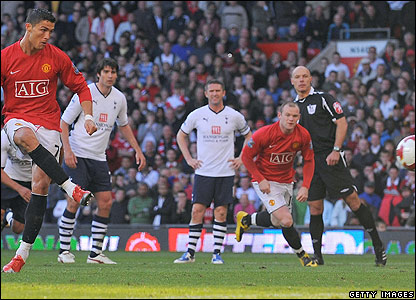 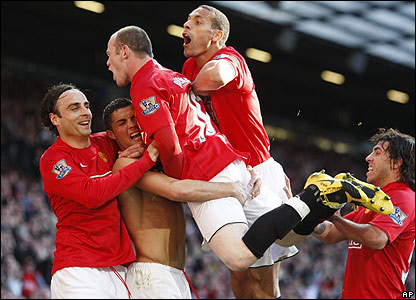