Cristiano Ronaldo retrurned on a slow and frustrating night for Manchester United. He came on as a substitute to try and grab a goal (and nearly did!) as United drew with Villareal in a stalemate.

United dominated the first half without ever hitting top gear against an efficient Villarreal side.

Rio Ferdinand wasted an opportunity to put United ahead after only seven minutes, but he was surprised when Owen Hargreaves' corner arrived at his feet and he miscued his effort off target.

Villarreal keeper Diego Lopez looked uncertain, and he was called into action to save efforts from Nani and Carlos Tevez.

United were denied what was a clear penalty eight minutes before the interval when Ji-Sung Park tumbled under Joan Capdevila's challenge, but German referee Wolfgang Stark waved away the appeals.

Villarreal fashioned the best move of the match and almost took the lead after 59 minutes when Franco flicked Angel Lopez's cross against the post with United keeper Edwin van der Sar beaten.

The moment Old Trafford had been waiting for arrived after 65 minutes when Ferguson unleashed Ronaldo - and the effect was instant. Ronaldo received a rapturous reception, despite a summer of speculation linking him with a move to Real Madrid, and he was quickly a threat with a volley that worried keeper Lopez.

He then combined brilliantly with Rooney to set up Tevez after 71 minutes, but Gonzalo Rodriguez cleared off the line.

Ronaldo's presence had unnerved Villarreal, and he headed just wide from Nani's cross and then set up Evans with a perfect cross, only for the youngster to send a diving header against the post. 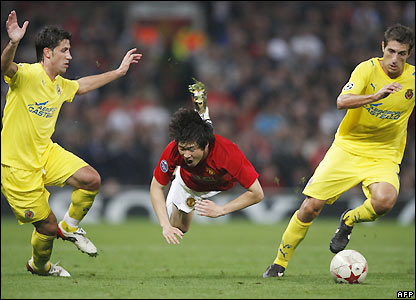 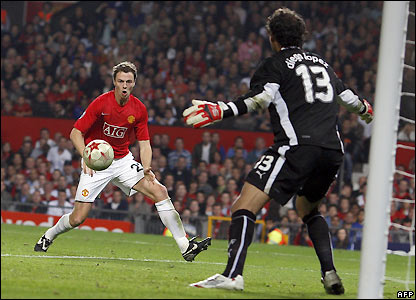