Ronaldo Wins it for United

Cristiano Ronaldo was the match-winner as Manchester United moved eight points clear at the top of the Premier League after a hard-fought win over Blackburn.

With United playing Inter Milan on Tuesday, Edwin van der Sar and centre back Nemanja Vidic were left on the bench with Tomasz Kuszczak and Evans left to fill the key roles, a policy that almost backfired on the Scot as Blackburn threatened to steal a point.

Blackburn were sloppy in possession and their defence was creaking as Nelsen hooked a Ronaldo cross away at the far post with Rooney waiting to tap in. Patrice Evra put a follow-up strike just wide as United patiently passed and probed in the knowledge a goal would come.

Sure enough it did when Nani curled in a low cross, and although the outstretched leg of Nelsen got a touch to the ball, it was not enough, and Rooney pounced to score from close range.

But Rovers regrouped and were soon level as United conceded only their 11th league goal this season. Andre Ooijer stole the ball from Nani and slid a pass through to Santa Cruz, who rode a Rio Ferdinand challenge, rounded keeper Kuszczak and slotted in.

Evans thought he had restored the home side's lead with a header from a dubiously awarded corner, only for his effort to be ruled out for a Ronaldo push on Nelsen.

The New Zealand defender was soon in the thick of the action again, though this time in the United box, as his first-time shot came back off the woodwork, with El-Hadji Diouf's effort from the rebound saved by Kuszczak.

Ronaldo punished the visitors for the miss when he angled in a free-kick from just outside the left edge of the area with a stunning strike. The Portuguese had earlier been booked for diving and might not have been on pitch had he also been carded for kicking out at David Dunn.

Blackburn will also feel aggrieved that they did not get a penalty when Pedersen went down in the closing stages. 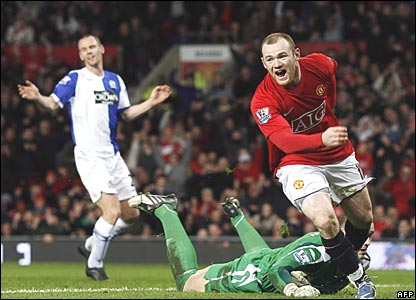 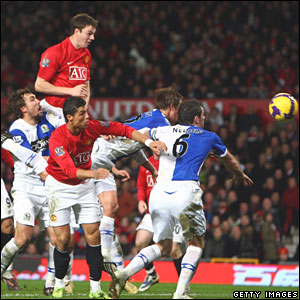 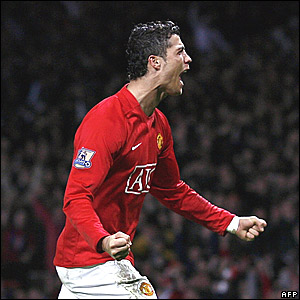