Carlos Tevez hammered home a late winner as Manchester United turned up the heat on the Premier League pacesetters with victory at Stoke.

It was the perfect return to domestic action for United after they beat LDU Quito in Japan on Sunday to lift the Club World Cup in Japan. United made five changes to the side that won that trophy - one enforced when defender Rio Ferdinand injured his back in the warm-up and was replaced by Jonny Evans.

And Evans was almost caught out in the opening seconds when Fuller got on the end of a long ball into the box but shot wildly over the bar. United responded instantly, and Nemanja Vidic was frustrated when he headed wide from Ryan Giggs' cross.

Wayne Rooney almost opened the scoring after 24 minutes with a neat header from Gary Neville's cross, but Stoke keeper Thomas Sorensen was well-placed to make the save. United, inevitably, pressed forward straight after the re-start and Sorensen did well to block a stinging drive from Tevez.

Ferguson knew how important three points would be, and he made a positive change by sending on Dimitar Berbatov for John O'Shea.

Stoke, having finally built up some momentum, were reduced to 10 men with 20 minutes left when Wilkinson, having already been booked, stupidly clattered into the back of Ronaldo and was deservedly sent off. There was no excuse for the challenge, although Ronaldo was also fortunate to escape with a kick at the Stoke defender a few minutes earlier.

Rooney had also shown signs of indiscipline earlier by throwing out an elbow at Abdoulaye Faye in a touchline clash.

Stoke were firmly on the back foot after the sending off, with Berbatov heading over and Sorensen saving from Rooney's rising drive. And United broke the deadlock with seven minutes left as Tevez thrashed home a finish from six yards after Berbatov turned on Neville's cross.

Ronaldo almost made the victory more emphatic with a free-kick that flashed inches wide - but Stoke were unable to mount a late surge and United claimed a crucial three points. 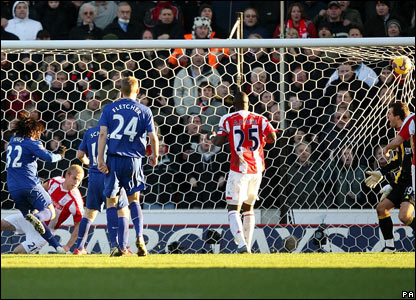