Cristiano Ronaldo wasn't up to his best (Fergie says its because Ronaldo has 'a bit of a bug' at the moment) but United were still too good for an uninspiring Spurs side.

Pavlyuchenko beat Nemanja Vidic to Tom Huddlestone's cross and glanced a header into the far corner to give Spurs a dream start. But Redknapp, who had selected a strong-looking line-up, was soon to feel discomfort as United took control of the match.

United, too, were not as under-strength as expected, and it was familiar faces that were on the end of chance after chance. Berbatov latched on to a ball over the top but dragged his shot wide and soon after, Tevez smashed a fierce effort against the bar.

It was not just experienced internationals who were catching the eye, United debutant Fabio Da Silva was making a big impact as an attacking left-back. And the skilful Danny Welbeck was denied what would have been a Ricky Villa-esque goal by Chris Gunter's excellent block after the winger had weaved past three players.

Scholes and Cristiano Ronaldo shot off target as United peppered Tottenham's goal and Alnwick saved superbly when he palmed over a Tevez volley.

Yet after all their intricacy, it was an ugly goal that brought United level, when Scholes' low shot took a deflection off Huddlestone to leave Alnwick stranded.

But the strike that put United ahead was top quality - and a double blow for Spurs as it involved two of their former players. Carrick picked out Berbatov with a sublime pass and the Bulgarian took one touch to control before placing the ball into the bottom corner.

But while there was a little more threat in the second half from Redknapp's side there was no real cutting edge. Gareth Bale shot wide from a tight angle and David Bentley, who later made way for Jermain Defoe, also struck a shot off target.

Ronaldo forced another good save from Alnwick but chances dried up as the tempo of the matched slowed.

United will clinch an unprecedented quadruple if they win the Carling Cup, the FA Cup, the Premier League and the Champions League.

However, boss Sir Alex Ferguson will be concerned after Da Silva and Welbeck became the latest additions to a lengthy injury list while Ronaldo, who was suffering from a stomach bug, was withdrawn early. 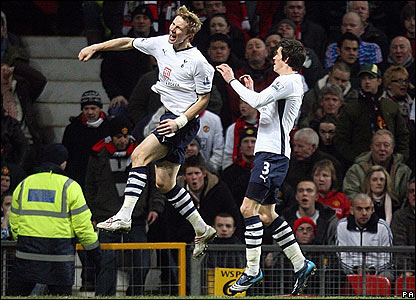 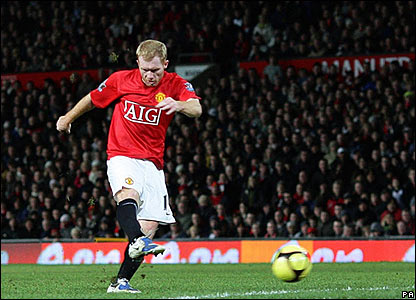 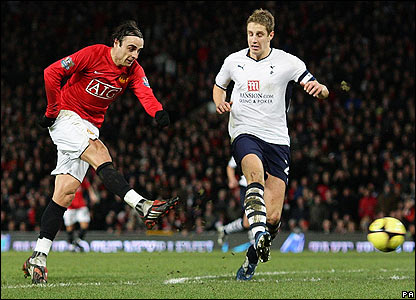