Cristiano Ronaldo wasn't particularly at his best for the first hour, but came t life as Manchester United sauntered past a hard-working Blackburn side. Berbatov was looking in good form, and linked up beautifully before Cristiano crossed the ball to Rooney to put the Reds two up, and out of Blackburn's reach.

It was a thoroughly convincing display by the Premier League champions, who appear to have fully recovered from an indifferent start to the season. They were boosted by Rooney declaring himself fit and willing to play and it was he and strike partner Dimitar Berbatov who were behind much of United's best work.

Former Tottenham forward Berbatov oozed class as he repeatedly opened up the Blackburn defence with some incisive passing. Darren Fletcher was the first to benefit as he ran on to an angled ball only to slot wide of the target. The recalled Ryan Giggs was the next to profit from a Berbatov ball but he saw his left-foot spectacularly saved by Brown.

A minute later and keeper Brown was somewhat harshly picking the ball out of the net. The Blackburn stopper, standing in for the injured Paul Robinson, collided with Vidic as he went to try and collect a Rooney cross and the ball was headed in by Brown at the back post. While the United defender celebrated only his third goal for the club, his namesake in the Blackburn nets vented his fury at referee Steve Bennett for allowing the goal.

Rooney could have added a second after another defence-splitting pass from Berbatov, but Brown came out quickly to narrow the angle and save with his left hand.

Other than a Matt Derbyshire shot that was saved by Edwin van der Sar and a Brett Emerton effort that flashed wide, there was little for Ince to be positive about in the opening half. And his half-time team talk failed to alter the flow of the game as United dominated, with Berbatov setting up Ronaldo only for him to drag his shot wide shortly after the break.

For an hour the Portuguese winger had looked a shadow of his former self as he continues to battle back from injury. But then he received the ball on the right and exploded past Martin Olsson before squaring for Rooney to curl a shot past Brown.

Rooney could have had a second when he ran through before lobbing Brown, only to see it land on the roof of the net, before the Rovers keeper did brilliantly to deny Berbatov a deserved goal with his feet.

Ronaldo slid a shot past the post and then set up Tevez to fire against the upright as United kept going until the end. Ince's side simply had no answer as he was handed a lesson from his former boss, but on this form few teams in the Premier League could have lived with United. 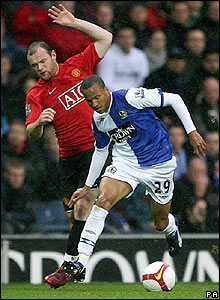 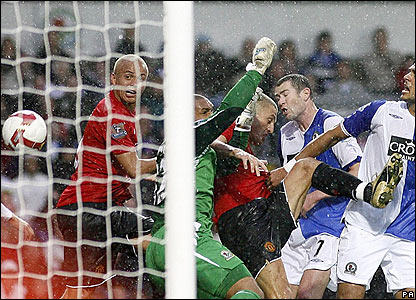 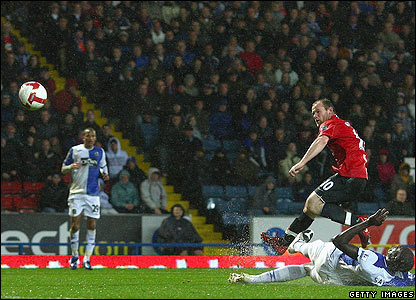